What are the Special Olympics? 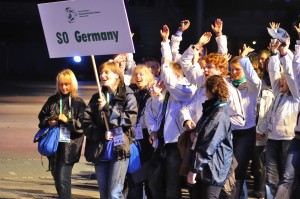 The Special Olympics are one of the world’s largest sporting organisations that is for children and adults that have intellectual disabilities and physical disabilities. They provide sports training and sports activities to over 5 million participants in about 170 countries. Special Olympics competitions are probably held almost every day somewhere in the world with recent exceptions during the COVID pandemic. It is estimated that there are more than 100 000 Special Olympics events a year. Participation in the Special Olympics programs are available for athletes free of charge. Those who have intellectual disabilities are encouraged to join the Special Olympics programs because of the physical activity, which has the benefits to lower the rate of cardiovascular disease, obesity and diabetes along with a lot of other health benefits. In addition they have the emotional and psychological benefits that include things like self-confidence and building greater athletic skills with higher self-esteem. A wide range of sports are on offer such as athletics, basketball, bowling, cricket and cycling.

The Special Olympics World Games is a major event that is put on by the Special Olympics committee. These World Games alternate between summer and winter games, in two-year cycles that recur every fourth year. They were first held on July 20, 1968 in Chicago, Illinois. About 1000 athletes from the USA and Canada took part. International participation and involvement expanded in the subsequent games. They were first held outside the USA in 2003, in Dublin, Ireland with 7000 athletes from 150 countries taking part. The most recent World Summer Special Olympics were held in Abu Dhabi, United Arab Emirates in March, 2019. The next one will be held in Berlin, Germany between in June, 2023. The first winter Games were held in 1977 in Steamboat Springs in Colorado, USA. The first winter games outside the United States was in Austria.

When the Special Olympics began to grow those that staffed them and volunteers who helped out at events began to notice that many of the athletes both children and adults with the intellectual disabilities also had many untreated health and medical problems. In 1997, the Special Olympics movement began an initiative that was called Healthy Athletes, which offered health screenings to athletes in need at these events. The Special Olympics movement has become a major force in the health care of those with intellectual disability. At most events many different types of health professionals offer their services at part of the medical or health care team at these events. One of these who are heavily involved is Mandy Abbott who is a podiatrist in Glasgow, UK and has played a role in organising podiatry volunteers at these events as well as organising for podiatry students to get experience participating at such events. She was interviewed by the hosts of the podiatry livestream, PodChatLive where she talked about these events and how she got involved and what she and other get out of participating in the volunteering. The experience is especially valuable for students in training to be exposed to these types of problems.

I had a magical experience working as a volunteer at the 2015 Special Olympic World Games in Los Angeles this summer. I supported basketball...

Activities are an invaluable element of our living and it should be within our life. The activities have the ability to just swing the mood...

The 2016 Summer time Olympics are going to be held in Rio de Janerio and is assured to be an incredibly lively occasion. The nation expects...