How Much Does Hiring Remote React Native Developers Cost? 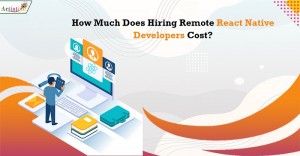 Many companies have utilized this technology, including Skype, UberEATS, Instagram, Tesla, Airbnb, etc., and it's obvious that you may do the same. As a result, the first question is whether or not to hire React Native developers to work on your plan. Another question you might have is how much it will cost you, what factors will affect it, and where can you begin?

Hiring a React Native developer is affected by these factors

When it comes to calculating the cost of hiring React Native developers, there are several factors to consider. In order to sort out your priorities, you may consider the following frequently asked questions:

You will need to answer these questions briefly, so we can discuss how these factors affect the cost of hiring a remote React Native developer.

Application size is one of the key business requirements that play an important role in determining the cost of hiring React Native developers. There are three types of applications according to their size:

As a result, if you have a general idea of the size of your application, you can estimate the amount of work required, which in turn may assist you in determining the development costs fairly.

You can choose whether the mobile application you want to develop has low, medium, or high complexity based on the features it includes. Now that features are becoming more complicated, hiring developers may become more costly. It's not always the case, and you can hire less experienced developers to develop basic features at a lower cost. Accordingly, the development cost can vary based on the complexity of the features.

Let's take a look at one of the most used app categories and estimate how complex they are based on their features. In order to build a fundamental level application that does not require APIs, complex backends, simple UI components, login functionality, etc., you can hire an inexperienced developer for a minimal cost.

Alternatively, if you plan to develop a database-based or API-based application that includes features such as customized UI, payment integration, back-end server, API integration, etc., you'll need a mid level developer with some experience, and that will increase the cost as it takes more hours to implement such details.

The eCommerce-based applications that you'll see today also require a high level of customization and include highly-complex features. The integration of SaaS platforms and integration of shopping carts will be needed. It would be necessary to hire a senior-level developer with a small team for these types of applications. Accordingly, this app will have the highest cost of all those discussed.

Features of Mobile Applications are Complex Due to a Number of Factors:

React Native app development requires different types of skills based on its level of complexity. The experience of the developer is as important as the developer's skill.

There are three categories of React Native developers based on skill and experience – Junior, Mid, and Senior and each type has a different skill set that you may find in interview questions.

If you want to know tips on how to hire React developers, you should also think about the engagement model you want to use.

An organization can choose from three types of engagement models:

A dedicated engagement model is typically used by organizations like Artistixeit. The dedicated engagement model allows you to hire remote React Native developers on-demand. With Artistixeit, you have the flexibility to add and subtract resources according to your project requirements, whether it's a project manager, a backend/frontend developer, a UI/UX developer, or a quality assurance engineer.

In order to achieve this, our team of industry experts will create a clear roadmap for the entire project and its development life cycle.fe cycle. We then break down the lifecycle into important milestones and work toward achieving them one by one. These compensations are tied to the various milestones, allowing the project owner to stay in complete control while the remote developer knows what path he or she should take. The system also adds a layer of transparency between the developer and the client.

We have examined the factors that affect the cost of hiring React Native Developers so far. Our next step is to explore the average cost of a project based on key factors such as developer experience, geographic location, and project scope.

The field of software development is highly experience-driven, which is why clients will pay more for experienced developers as they bring a wide range of skills and knowledge. The right developer can be easily chosen if you already know how much expertise your app requires.

React Native Developers are classified into junior, mid, and senior levels based on their expertise and skill level.

2. Based on geographical location

United States developers earn the most money for React Native, followed by Canada. The United States is a global tech hub with world-class quality developers. Not Additionally, high living costs and fierce competition contribute to the overall higher cost in comparison to other parts of the world.

The continent of Europe is another place where you can find the best React Native developers. There are fewer developer wages here compared to North America, so it can prove to be an economical option for those living in Europe but far away from North America. Eastern European and Western European technologies are among the major ones on the continent.

There is a great deal of talent available in Asia for React Native developers. Despite the low cost of living, this does not mean that you will get a lower quality product. Instead, you will get a product that is of the highest standard but the developer rates will be lower.

Even tech giants like Facebook, Google, Amazon, and so on have offices in Asia and hire local developers when needed.

3. Based on the hiring options

Choose between two hiring options: freelancers and development agencies with dedicated teams. Dedicated teams consist of experts and skilled developers who focus all their attention on your project, unlike freelancers who work on their own.

The dedicated team can provide greater flexibility and development speed, since you can increase the resources on-demand. There is also better communication with the dedicated team in comparison to freelancers. There is a dedicated member of the team who talks with and handles queries from the end client throughout the duration of the project. The feedback he receives is also communicated internally on a regular basis, keeping everyone informed. Due to the lack of a defined role, this isn't the case for freelance remote developers.

Artistixeit is one of the premier software development companies worldwide focused on providing a world-class on-demand development team. We help you expand your technological capabilities by providing the right talent. Additionally, we would recommend the development team that fits your project needs and delivers a high-quality product on time and within budget.

You may have used our guide to estimate the cost of hiring React Native app developers or to sort out the different options for you. We understand that it is challenging to hire a world-class developer for React Native. When you're the only one responsible for sourcing, interviewing, and onboarding candidates while simultaneously managing the other aspects of your business, this can take up a lot of your time.

Therefore, it is always advisable to hire dedicated developers from companies like Artistixeit. The best part is that you can always add or subtract resources on demand, depending on your project requirements. We handle all aspects of sourcing, interviewing, onboarding, payroll, healthcare, etc. For you so you can focus on your business.

Artistixe IT Solution LLP was established in 2014 to provide IT Software Services for small to large-sized business. Our mission from the very first day has been to cultivate professional relationships with our clients to provide effective

In order to get excellent services of remote key replacement one must prefer the experts. They can provide a better advice regarding your...

Bob Andrew
Universal Remote Controls - one remote for all devices

Busy lifestyle and overburdened with responsibilities leaves us with no or less time to get along with the simplest of chores. This is also...