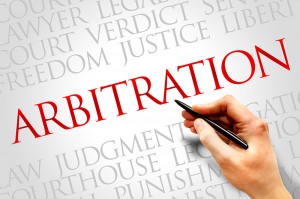 In this case, the losing party will file an annulment case. However, it may be possible to argue that the parties have accepted the tribunal’s jurisdiction, or have waived any right to object, or have lost that right by not objecting at the first opportunity.

The parties to a dispute may apply for annulment of the arbitrators’ award when the court is looking into its ratification in the following situations (Article 216):

A request for nullification of the award shall not be rejected on the grounds of a waiver by a party of its right to the same prior to the issue of the award.

As a matter of public policy, arbitration is not permitted in matters such as ‘irreconcilable differences.’ This relates to criminal and public order offences, commercial agency agreements and labor disputes. Issues such as forgery and criminal offences are beyond the tribunal’s authority and the arbitration must be suspended while that issue is referred to the Court, which can take many months.

The Dubai Courts have jurisdiction over matters which arise at the start and throughout the arbitration that requires the Courts’ input. For example, interim injunctions to preserve evidence or attachment orders. However, once the arbitration has commenced, the Courts are likely to refer matters to the arbitration tribunal, although the tribunal may seek the Courts’ assistance for interim measures or to penalise a witness who fails to attend or who answers falsely. If the parties fail to agree on the appointment of an arbitrator, the Courts may make the appointment, and the tribunal must be an uneven number. If a party wishes to stay Court proceedings on the basis that there is an arbitration clause, they must raise that point at the first court hearing or they will be deemed to have waived their right to arbitration. If the arbitrator resigns from the appointment without good cause, they may be ordered to pay compensation.

The arbitration agreement must be evidenced in writing. Once appointed, the tribunal must notify the parties of the first hearing within 30 days and the final award must be issued within six months, although this can be extended. Moreover, arbitration proceedings are flexible and arbitrators are not required to apply the rules that would be applied in court, subject to any institutional rules that the parties may adopt. The parties must disclose documents which they will rely on but they are not normally obliged to disclose information that is detrimental to their own case. Witness evidence must be given under oath and generally, cases are presented by advocates and witnesses are cross-examined by the other party.

Corporate information, such as lists of shareholders or beneficial owners, may be impossible to discover, which greatly restricts a party’s efforts to gather evidence. Because there is no binding precedent, it can be difficult to determine exactly what the law is, although Court of Cassation judgments are usually followed.

The holder of a Trading License or a company director may bind a company, and the Articles of Association may name a manager who can bind the company, but anyone else can only do so if he is authorised to do so. This means that he must have a Power of Attorney (POA), and the POA must be given by someone who is authorised to grant it. A POA may be general or special. An arbitration clause is recognised as distinct from the contract in which it is written, and a person who signs an arbitration agreement must have a special POA expressly entitling him to agree to an arbitration clause.

Consequently, an attorney may only act on behalf of a client in arbitration if he has a special POA, otherwise, any award may be nullified. The Courts have held that a general power of attorney is not sufficient because the agreement to arbitrate involves a waiver of the right to bring an action before the Courts. Therefore, practically, the tribunal requires the attorney to provide copies of their POA's.

Legal PrincipleA party to an arbitration contract has right to request the annulment of arbitration award if arbitrator did not follow the...

Impact of COVID-19 has the left the world speechless, yet every country and its major organizations are coping with the pandemic to ensure...