Surprising Creativity and Sense of Humor Found in Chinglish 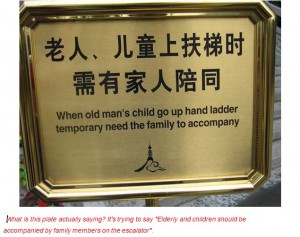 The "Chinglish" is getting hot again - in a more unusual and surprising way this time. It's not an translation error on a road sign or a restaurant menu that will simply leave you speechless and laugh this time, but some very innovation new "English words" created from nowhere by the Chinese people, some good examples including: "Smilence" (smile quietly), "Emotionormal" (emotion in peace), "Chinsumer" (the Chinese tourists who shop a lot when traveling overseas) and the Vegeteal (a Web game about "stealing the planted vegetables"). Chinese netizens spread and play with these Chinglish words over the online forums, blogs and games, while more new words are still being invented and come into frequent use.

Ironic enough, the connotation of the term "Chinglish" has been evolving, developing and expanding extraordinarily over the time. At the begin, the Chinese people used this term to mock on those learners who speak broken English. Later, some native English speakers began to collect and spread those catchy and funny misuse of the English around all corners in China's cities and country sides. People's attitude toward Chinglish is changing from refusal and mocking to appreciation and even encouragement. Language is the most sensitive reactor of the change of times. Behind the prosperity of Chinglish is the closer communication between China and foreign countries and the enhancement of China's international influence -- after "Long time no see" and "Good Good study, day day up", more Chinglish may become the daily language of the English speakers.

Chinglish has been defined as English with Chinese phonetic, grammatical and lexical features. Still, Chinglish is on the agenda because of the large number of foreigners coming to China to work, live and travel. The most influential Chinglish is the English on public signs and restaurant menus, which on the Internet appear in the tens of thousands, mostly taken by foreigners and accompanied by pictures. For example, "Please take good personal luggage" is written as "Please take good personal luggage", and "First under on, take riding with civility" is written as "First under on, take riding with civility". According to the "authors" of these funny text, they originally only tried to "get bilingual version" for these text shown on the subway stations, tourist attractions, restaurants and other public signs without giving a second thought of their correctness. Some just took a dictionary or use Google translation software to finish the job, hoping that not many people would ever notice that. But as more and more foreigners here, they notice first in English, so these funny errors emerge one by one.

Many visitors to China may have noticed a great many confusing yet funny English signs like this. A local translation agency went deeper to compile a huge list of 140 pictures for this type of hilarious Chinese-English translation fails: https://www.actranslation.com/knowledge/fun/hilarious-translations.htm

Surprisingly, many native English speakers seem not some "hatred" about the Chinglish. Perhaps it has something to do with the encouragement of foreign friends. At present, many Chinese people have begun to create their own English words and sentences in their own way, such as "Smilence". There are also some words that literally translate Chinese wisecracks, creating misalignment and funny effects, such as "We two who and who? (we are close friends), "If you want money, I have no. If you want life, I have one." (no money for you. Kill me If you dare), "American Chinese not enough (small flaw in a perfect thing). Xinhua reported that it was "a Chinese pun to enrich the English language" - and that it was an innovative form of Chinglish.

Many native English speakers' fondness for Chinglish may seem surprising, but it's actually easy to understand. Just as we see foreigners learning Chinese, even if the frequency of mistakes, will not look down upon each other. While the Chinese who are learning English are trying to correct the wrong usage of Chinese style factors, many foreigners are collecting and sorting the English that is scattered in every corner. Of course, there are also foreigners who act as "language translators" and try to help Chinese cities correct their English mistakes, like David du of Beijing international studies university. But, as the guardian reported, more foreigners find Chinglish "horribly wrong", adding flavour to alphabetic language. For foreigners visiting China, it has become fashionable to photograph Chinglish signs and upload them online. More than 4,000 Chinglish photos have been posted on the photo-sharing website Flickr, and foreigners are even starting to talk about which scenic spots and cities have the most Chinglish. For example, Lianhua mountain in Guangzhou is home to several well-known Chinglish sites.

The Texas-based Global Language Monitor (GLM) gives glowing praise to Chinglish from a global perspective and from the perspective of English language development. Since 2005, Chinglish has been listed as one of the top 10 words that affect the world. According to GLM, Chinglish is bringing profound changes to English. A large number of Chinese words have entered English and become the main source of new English words, accounting for 20%. Each year, they will select the most popular Chinglish of the year, such as "No Noising" (" Quiet,please "in English) in 2006," Question Authority "(" Information Booth" in English), Deformed Man Toilet (" Handicapped Restroom "in English) in 2008, Airline Pulp (" Airline meal"). The English language is "Food Served Aboard Airlines"). According to GLM, Chinese has a surprising complexity and richness, and its ability to produce new words and accept foreign ones is very strong, while Chinglish is a "welcome mixture".

I am a blogger, I have been working since 4 years.

Jugal Patel
What an Excellent Job of Professional Speakers!

Working with a business Speakers bureau to find the correct professional speakers for your particular event that can help you avoid hiring...