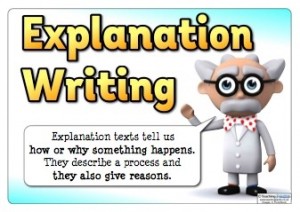 This explanatory text material has not been found in textbooks that refer to the previous curriculum. Besides that, the availability of references on this material on the internet also proved to be very minimal. This situation is inversely reversed by the fact from the google search engine which notes that requests for information with the keyword "explanatory text" are quite high. That is, there are many people out there who are in need of discussion related to this text.

An event both natural events and social events that occur around us, always have a causal relationship and have a process. An event that happens around us, not only for us to observe and feel, but also for us to learn. We can study the incident, for example in terms of why and how it can happen.

Definition of Explanatory Text According to Experts

Explanation comes from a foreign language (English) which means the act of explaining or explaining and explaining information, statements or facts (The Contemporary English-Indonesian Dictionary: 651). Understanding Text Explanation (Explanation Text) is a text that contains processes related to natural, social, scientific, cultural, and other phenomena.

Whereas ACCORDING to Restuti (2013: 85) says that the definition of explanatory text is a text that explains or explains about natural or social processes or phenomena.

And According (Mahsun, 2013: 189): This text is structured with a structure consisting of parts that show a general statement (opening), a row of explanations (contents), and interpretations / conclusions. The general statement section contains brief information about what was discussed. The line description section contains a sequence of descriptions or explanations of the events that occurred. Meanwhile, the interpretation section contains the author's brief opinion of the event that occurred. This section is the closing of explanatory texts that may or may not exist.

The purpose of explanatory text writing is to explain the process of creating something that happens naturally, or the process of working natural and social phenomena.

Explanatory text has a structure consisting of general statements, followed by a sequence of causes and ends with interpretations. To understand more about the structure, please refer to the following description.

Row of explanations, Contains an explanation of the process of why these phenomena can occur or be created and can consist of more than one paragraph. A series of explanations describe and specify the causes and consequences of a natural disaster that occurs.

Interpretation (Optional), Closing text that is optional; not a necessity. The closing text in question is, text which is the essence or conclusion of a general statement and a series of explanations. Optionally it can be in the form of responses or draw conclusions on the statements in the text (Mahsun, 2013)

Characteristics of the Explanatory text

The structure consists of general statements, sequence of causes and interpretations as explained above.

Contains information based on "factual" facts.

Factually it contains information that is scientific or scientific in nature such as science and others.

Rules of Expectation of Text Explanation

Use time conjunctions and causals for example if, if, so, before, first and then.

Explanation is written to justify that something causally explained is true.

How business structure can be improved by SMS termination India?

SMS termination India has become a great concept these days. This is a special kind of service that has boosted-up the standard of...

Renu Katewani
What are the best characteristics of an improved platform for Text messaging in India?

Mobile-age has brought the most advanced marketing scheme in the form of text-messaging. Text messaging in India is quite famous as business...

An explanatory essay is likewise a kind of scholarly research. It expresses the viewpoint of the writer on a certain subject or issue...