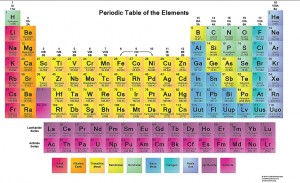 Periodic Table of Chemical Elements: Definition, Papers, Systems and Images What is the Periodic System of Elements? The periodic system is a table containing the identity of elements that are packaged periodically in the form of periods and groups based on the similarity of the properties of the elements.

Period is: horizontal lanes in the periodic system

Groups are: vertical columns in the periodic system

Explanation of the Periodic Table of Chemical Elements

Because the electron mass is very small, and the neutron mass is almost the same as the mass of the proton, the atomic mass is usually expressed by the number of protons and neutrons in the nucleus, in the isotope which has the most abundance in nature. The size of the atomic mass is an atomic mass unit (smu). Some isotopes are radioactive, and undergo decomposition (decay) of radiation of alpha or beta particles.

Before chemistry became a field of science, alchemists had determined symbols for both metals and other general compounds. They use abbreviations in diagrams or procedures; and without the concept of an atom joining to form molecules. With the development of substance theory, John Dalton introduced simpler symbols, based on circles, which were used to describe molecules.

Chemical symbols are used internationally, although the names of elements are translated between languages. The first letter of the chemical symbol is written in capital letters, while the next letter (if any) is written in lowercase letters.

Naming elements have long before the atomic theory of a substance, even though at that time it was not known which were the elements, and which were the compounds. When atomic theory develops, the names of elements that have been used in the past are still used. For example, the element "cuprum" in English is known as copper, and in Indonesian is known as copper. Another example, in German "Wasserstoff" means "hydrogen", and "Sauerstoff" means "oxygen".

The official name of the chemical element is determined by the IUPAC organization. According to IUPAC, the name of the element does not start with a capital letter, unless it is at the beginning of a sentence. In the latter half of the 20th century, many laboratories were able to create new elements that had a high decay rate for sale or storage.

The names of these new elements are also determined by IUPAC, and generally adopt the name chosen by the inventor of the element. This can lead to controversy over which original research group discovered the element, and the delay in naming elements for a long time.

Abhi Hole
How to read the periodic table

In this blog, we will tell how to read the table periodically. The periodic table is considered a chemistry-related table in which all the...