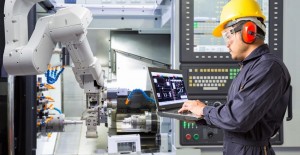 Robotics is a diverse branch of science and engineering that includes electronics engineering, information engineering, mechanical engineering, computer engineering, etc. Robotics assign with the operation, construction, designing, and use of robots and machines. It uses computer system, sensor feedback, and information process to control the robotics device. These technologies are used to develop mechanisms to substitute human efforts, and sometimes it replicates human itself. The concept of creating robotic machines that can stand the places and situations where the human body can't survive. For heavy load working the robotics machines are the best possible tools. Nowadays, many factories and companies have substituted the work of humans with devices.

Succor Of Robotics In Human Life

These days robotics have replaced a lot of workload from social life. Most of the massive works in factories and companies are done by the robotics machines. Robotics assists humans in tough situations, where it is next to impossible for human bodies to attain. Such as extreme heat, low pressure, extreme freezing point, etc.

Safety is the most important factor in using robotics devices. The system built in a machine is generally pre-installed. Thus, there are meager chances of any mistakes and accidents. Even if any accident occurs, there is no loss of human life in the process.

Another important aspect of using robotics is speed. Machines are way more efficient than human workers. They work faster and more perfectly. Machines neither get distracted, nor they do need breaks during the working hours. Thus, they do more work smoothly and efficiently.

Humans are likely to make a mistake, but in the case of robots, it is different. All the system and working process are pre-installed in the mechanical operation of the machine. Thus, while doing its work, there is no mistake. Humans may make an error while working, but in devices, this factor does not exist.

Working with machines increases the productivity level. Machines are able to work round the clock without a break which humans are not capable. This increases productivity as they work more than humans.

There is no change in work when a machine substitutes human. Instead, the tasks are done in a pattern. All machines and robots follow the instructions which are already present in their system. Thus, they do their work with the same consistency without contingent.

Robotics machines reduce human effort. The substantial works are being done by the machine itself, which makes the rest of the job easier for the employees of a company. To know more about Robotics Machines check here.

These technologies are used to develop mechanisms to substitute human efforts, and sometimes it replicates human itself. The concept of creating robotic machines that can stand the places and situations where the human body can't survive. Robotics has made the lives easier by providing different services to humans. It has proven that machines can do those works which are next to impossible for humans to do. It also helped many industries to grow more as machines increase production. It marked a new era for humans where machines do more efficient work than humans.

Market Scenario:Cloud robotics is a field of robotics that attempts to raise cloud technologies such as cloud computing, cloud storage, and...

Market HighlightsIn this rapidly changing environment, companies are expanding their scale of operations by increasing investments in R&D...