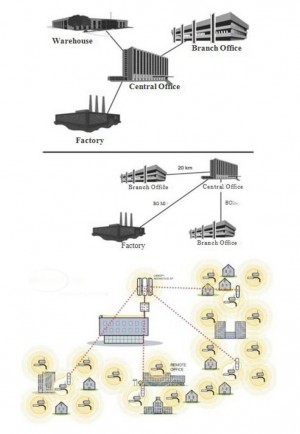 A metropolitan area network (MAN) is a computer network that usually covers a large city or campus. MAN usually interconnects a number of local area networks (LANs) using high capacity backbone technology, such as fiber-optic links, and provides up-link services for wide area networks (or WANs) and the Internet. The scope of this MAN is between 10 to 50 km, this MAN is the right network to build a network between offices in one city between factories / agencies and head office within its reach.

Metropolitan Area Network (MAN) is a computer network in a city with high-speed data transfer, which connects various locations such as campus, offices, government, and so forth. MAN network is a combination of several LANs. Metropolitan Area Network (MAN) is basically a version of a LAN that is larger and usually uses the same technology as a LAN. MAN is an option for building computer networks between offices in a city.

MAN is usually able to support data and voice, and can even be connected with cable television networks. MAN only has one or two cables and does not have a switching element, which serves to manage the packet through several cable outputs. The existence of switching elements makes the design simpler.

"MAN is optimized for larger geographic areas of the LAN, starting from several building blocks for the entire city. MAN can also depend on moderate-to-high-speed data communication channels. MAN may be owned and operated by a single organization, but will usually be used by many individuals and organizations. MAN may also be owned and operated as a public utility. They will often provide facilities for internetworking local networks. "

"A Metropolitan Area Network (MAN) is a large computer network that covers a metropolitan area or campus. Geographical coverage that falls between WAN and LAN. MAN provides Internet connectivity for LANs in metropolitan areas, and connects them to wider area networks such as the Internet. "

In the 1940s in America there was a study that wanted to use a computer device together. In the 1950s when the type of computer began to grow until the creation of a super computer, because of the high price of computer equipment, there was a demand that a computer must serve several terminals.

From this, the concept of time-based process distribution emerged, known as the TSS (Time Sharing System), the first form of computer networking applied. In TSS systems several terminals are connected in series to a host computer.

Some of the technologies used for this purpose are Asynchronous Transfer Mode (ATM), FDDI, and SMDS. This technology is in the process of being replaced by Ethernet-based connections (for example, Metro Ethernet) in most areas. MAN connections between local area networks have been built without cables using either a microwave, radio, or infra-red laser link. Most companies rent or lease circuits from general operators due to the fact that laying long cables that stretch is expensive.

DQDB, Distributed-queue dual bus, is a standard metropolitan area network for data communication. This is specified in the IEEE 802.6 standard. Using DQDB, the network can be up to 20 miles (30 km) and operate at speeds of 34-155 Mbit / s.

Also Read Articles That May Be Associated: Understanding Computer Networks And Their Functions And Kinds

An international standard for cell relays where multiple types of service (such as digital voice / video, or data) are delivered in fixed length (53-byte) cells. Fixed-length cells allow cell processes to take place in hardware, thereby reducing ATM delays designed for high-speed media transmissions such as E3, SONET, and T3. ATM differs in a number of ways from other more common data link technologies such as Ethernet.

Is a connectionless service used to connect LANs, MANs and WANs for data exchange. In the early 1990s, in Europe this service was known as Broadband Connectionless Broadband Data Service (CBDS). The purpose of connectionless is that there is no need to manage connections over the network before sending data.

Question: 1 Sara, the security administrator, must configure the corporate firewall to allow all public IP addresses on the internal...

Question: 1 A technician needs to limit the amount of broadcast traffic on a network and allow different segments to communicate with each...