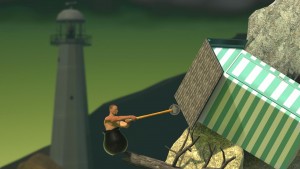 For those who like to play games that are not difficult to play, you can try downloading Getting Over It (GOI). Many gamers claim that GOI is the most difficult game ever.

The game was released in December 2017 by Bennet Foddy and described as a horror psychological adventure game. There are many positive reviews about this game, but not a few of them give negative reviews. The reason why there are negative reviews on average is because they have difficulty in playing it that makes them frustrated so do not want to continue.

Actually, GOI is a 2D game that is quite simple. Players only have to direct one character to get through various obstacles to keep moving up.

It's just that, to complete the mission was not that simple.

As the creator, Bennet Foddy deliberately presents quite difficult obstacles. Just logically, maybe the player will feel these obstacles will not be overcome. Foddy himself admitted that when he made this GOI, he positioned himself as a player, not a maker.

If you are curious about how difficult it is to play GOI, you might be able to play Gettin Over It demo first because this game is included in the paid game.

GameplayGOI invites players to struggle with a bald male character named Diogenes whose lower half body enters a pot holding a Yosemite hammer. The Yosemite hammer can be used to grip objects so Diogenes can move up by itself.

Players are challenged to bring Diogenes from a narrow valley to a city area full of rubbish. In the middle of the game, players will find comments from Bennet Foddy who discuss various quotes that are quite philosophical.

These quotes are usually related to what the player feels, such as disappointment or perseverance that is being felt. When it fails, the player will get a response from Bennet Foddy.

Maybe this will make players more upset if they never succeed in completing the mission.

Although it's only 2D, the graphics are pretty good where it's not a cartoon but rather made more similar to the real world. The terrain and background of the game are also made with details so that when they see it, the player seems to be able to feel in it too.In playing GOI, there is no need for a high graphics card to be able to bring out the best possible capabilities from the graphics of this game.

For PC users with Windows operating systems, using an Intel HD 4000 graphics card is enough, as is the case for Mac OS X PC users.

How, are you interested to feel how difficult it is to play GOI? Instantly download Getting Over It now and prove for yourself whether this game really makes players frustrated or not.

What Is Android APK? Complete Information

If you own an Android device you will likely have heard of an APK file at some point, and possibly wondered what it even is. Understanding...