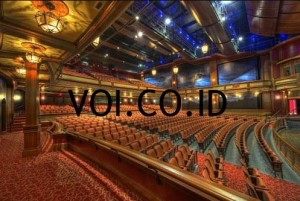 Theater art is art that can only be enjoyed only when a performance is in progress. The beauty that is enjoyed from the theater includes visual and audio beauty, in contrast to visual arts which are only visually beautiful or music that is only audio beautiful.

For the understanding of theater art in a broad perspective, theater can mean as a role performance performed by the actor without owning / reading the script. So, all scenes performed by the actors are done with full improvisation.Theater art in a narrower perspective is a stage performance where all the players and storylines have been set up with a script.

Starting from a primitive religious ceremony, which allegedly in the ceremony there is a play that must be played. Although his religion does not exist anymore, but theatrical elements are still displayed.Starting from singing for the hero or meritorious person who has died and then the ritual of the song develops into theaterStarting with storytelling activities that developed into theater.

However, in fact, the oldest theater script is a manuscript written by an ancient Egyptian priest, I Kher-nefert in 2000 BC. This manuscript is also known as the Abidos script.

Abidos itself is the name of a city where a ritual theater where the manuscript was found. This text itself tells about the battle between good gods and bad gods. Many experts believe that this theater has actually been played since 5000 BC, but it was only written in 2000 BC.

This is deduced from the picture in an ancient grave relief that is similar to the Abidos script storyline.

The following is a review of theatrical arts.

History of World Theater Arts and Its CharacteristicsThe development of theater arts is actually quite significant. The history of world theater itself is divided into several phases, namely:

2. Theater of the TransitionThe most striking feature of transitional theater is the written script. However, at that time the manuscript written was still in the form of an outline story. But, the show has begun to use the stage and decoration.

Theater at this time is still influenced by theater techniques from the west. Especially from the Netherlands who at that time colonized Indonesia.

Earlier, in this transition phase they did not yet know the term theater. Every show that they do is always called a charade.

So, the development of theater arts in Indonesia and in the world has a slightly different development. In Indonesia itself, theatrical arts began to develop in the days of the Hindu kingdom and the Dutch colonialism, while in the world it began since BC.

That's some knowledge about the History, Examples, Characteristics, Types, Concepts, Clippings, and elements in theater. Theater itself is often staged on the stages, even in the latest developments, there is also a street theater that can be enjoyed on the roadside.https://aptoide.co.id/

A custom home theater is a top-selling function getting added to numerous custom properties lately. The era of going out to a movie theater...