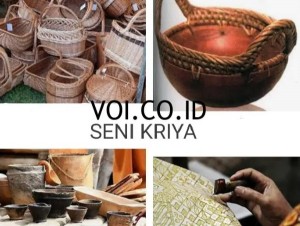 There are many kinds of arts that can be found, especially in Indonesia, one of which is art. The name is indeed not as familiar as the art, music and dance. However, when seen clearly, craft art is a work that often appears in everyday life.

There are various kinds of things that are useful for life from this art craft skill. That happens because humans are very attached to the skills to make the objects they need. If so, then what exactly is the meaning of craft art?

The following is a complete explanation of craft art, starting from the understanding, history, functions, types, and examples of craft art.

Craft art is the work of art created by humans, in its manufacture requires high skill and creativity. Craft art is taken from the Sanskrit language that is "krya" which in language means work, work. from the word "work" is created a "work" produced by humans.

In making this craft of art not only concerned with its function, but also the aesthetic value that needs to be developed. In the manufacturing process is also carried out with special techniques and not careless, so as to create a function and aesthetic value in a balanced manner. In Indonesia, the results of this craft are included in the category of applied works of the archipelago.

Usually the products that are produced by craft art are household tools and objects needed in life, with manufacturing techniques using hands (handmade). Without realizing it, we often see these objects since ancient times, for example, chairs, wood, ceramics, jars and others.

The applied art of the archipelago or craft art is a work of art that has been created since the days of our ancestors. In fact, according to several sources inform, that art has existed since prehistoric times, where the making of objects is still made from simple materials. For example, stone, metal, clay, and other easily found natural materials.

This has been proven by the discovery of a young stone (Neolithikum) which has the same shape as a type of craft art. At that time, the object was used by humans as a container for hunting and farming needs.

In ancient times the art of craft was made by focusing only on functional elements to meet the needs of life. But along with the times, prehistoric humans at that time already knew art. This can be concluded based on the discovery of various decoration or symbols of belief used for the needs of spiritual life.

Since ancient times the art of craft continues to experience developments such as the following,

This development occurred during the Hindu-Buddhist kingdom, at which time the community had produced various types of craft art. The making is also motivated by the philosophy of religious life such as Hinduism, Buddhism, and Islam. Examples of types of craft art in classical times, among them are

Kris and other weapons

The work produced from traditional Kriya art began to develop according to the character, manners, and the environment at that time. In making the community has its own techniques with materials and tools available around the residence.

The development of Indonesian craft art only occurred in colonial times. At that time the Indonesian people were more open to education that gave priority to physical life and rational values. This is what makes public awareness fade with the value of traditional craft art.

The artists find it difficult to pass their expertise to the next generation because of the commercialization process. That is a process where the making of traditional craft art is combined with new craft with industrial materials.

Global Amphibious Land Craft Market: OverviewIn order to secure the coastline of the nation and to protect the seaborne trade of the nation...

Craft bags are manufactured from paper produced from chemical pulp during the craft process. Bags made of wood fibers have an aesthetic...

Global Craft Bags Market: OverviewCraft bags are manufactured from paper produced from chemical pulp during the craft process. Bags made of...