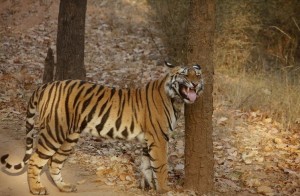 At the turn of the 21st century not all was lost and there were forty thousand tigers in India. This in spite of commercial forestry, especially the massacre of prime hardwood trees like Teak and Sal, much forest remained that could support the big cats in India.

But that was not to be felling of trees continued not only for commercial purpose but also for clearing land for agriculture. The imperative was the need to feed ever growing population in the country. The teeming millions had to be fed and subsequently large scale destruction of ecosystems took place in that period.

And to add to the woes, hunting continued unabated, the princely characters and the local landlords made merry with imported guns. The poachers and the hunter gatherers were not left behind, cruel to the bone they used deadly traps and snares. There was a complacency about the big cats in India as if they were a never ending species. But the bubble was about to burst as the regal hunters and their enterprises soon realized that the numbers were dwindling and drastically at that.

Whence the extinction was imminent a huge outcry replaced complacency, the Indian Government then made a sensible move. In 1972 by Wildlife Protection Act hunting of all life forms was banned without any leverage. An endeavor to save the tiger called Project Tiger was launched by the Central Government. The program was hugely successful but complacency set in again. Organized poaching had replaced hunting in its most vicious form. This was in lieu of demand for tiger bones and parts for TCM or traditional Chinese medicine and of course for delicacies in China and some Asian countries.

The disaster unfolded with poaching of all the tigers in Sariska and Panna Tiger Reserve unfortunately this happened with the connivance of some in the forest department responsible for protection.

The rot was quickly stemmed, not only the protection was enhanced, correction mode began to thwart the nefarious designs of the mafia involved in illegal animal parts trade.

The big cat conservation is at peak in this reserve which is also a National Park. Situated in Madhya Pradesh or Central India the reserve receives funds from the Central as well as State Governments. Many NGOs also contribute to conservation fund and some have donated vehicles for patrolling as well.

Regulated tourism contributes significantly to the funds as much of the revenue comes from gate fees. Thousands visit the destination on tiger safari and bird watching expeditions - they are the largest contributors. This is not all, tourism endeavour generates hundreds of jobs for the locals and supports local industry as well. Most of the services in tourism and management are reserved for indigenous communities who in turn favor protection of the forests and saving the big cats.

This is thanks to tiger conservation the future is bright. A significant success has been achieved in reserve like Bandhavgarh National Park. With strict protection measure and conservation inputs not only the tiger population but its prey base has subsequently increased. The big cats are being translocated to other reserves with for gender parity. Many other reserves are being prepared for this exercise.

Stories on Wildlife - B2: A legend fades in the mist of time

B2..The mere mention of the name would be enough to rouse me from a deep slumber. And it's with misty eyes and heavy heart that I remember...

Navin Raheja
BANDHAVGARH: A mystic blend of mythology and nature

There really is nothing more humbling than seeing a tiger in the wild, and for any budding wildlife enthusiast looking for the next exciting...