How do you make a film about the purchase of a piano? 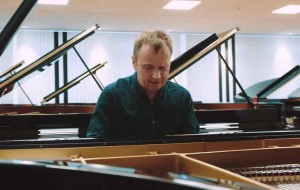 You could argue that taking one world-renowned concert pianist, adding in a European destination and sprinkling with unlimited access to the Steinway factory, might be a good place to start!

This was the pleasant situation we found ourselves in when St Mary's Music School in Edinburgh asked us to document the selection process for what is to be a once-in-a-generation purchase of a new Steinway Model B piano.

Since 1972 the school has also educated young instrumentalists, composers and singers.They play a selection of instruments from piano to bagpipes.

The Steinway piano company was founded in 1853 in America by German piano maker Heinrich E Steinweg later known as Henry Steinway. He opened the Hamburg factory in 1880 where pianos are still handmade in the same way today. A Steinway piano is recognised for exceptional quality and they dominate the market for high-end grand pianos.

Steven Osborne is an award-wining Scottish classical pianist who has played all over the World with many orchestras. He started his musical career at St Mary's Music School.

We had a 3 day shoot in Hamburg where we followed Steven Osborne and Head of Piano, John Cameron as they put 5 selected pianos through their paces.

Whilst there, we also had the chance to gather location b-roll of the city itself including the incredible Elbphilharmonie! We spent an amazing day in the Steinway factory filming the stages of manufacture that these exquisite instruments go through.

The rest of the film was filmed back in Edinburgh at St Mary's Music School. We filmed the delivery of the piano and it being played by some of the school's very talented pupils.

We loved every minute of this production. Our highlights were the people involved. From watching and filming the very talented and professional craftsmen at the Steinway factory to filming and listening to the talented students, teachers and musicians at St Mary's Music School.

We know the students and teachers will thoroughly enjoy playing their new Steinway Model B piano for many, many years to come.

At STROMA Films, we have many years of experience working with arts organisations, musicians, artists and designers. If you would like a film that showcases your organisation or your talented artists and musicians, we can create a crafted film with a compelling narrative.

As directors, writers, producers and editors, we’ve never stopped being inspired by the people we work with. We love spending time with creative people and filming their work, skills and personality.

Market Scenario:The film capacitor are electrical capacitors with an insulating plastic film, which has huge demand in industries. The...

Vertical Form, Fill, and Seal (VFFS) machines are used in the consumer products industry for a wide variety of packaging applications...