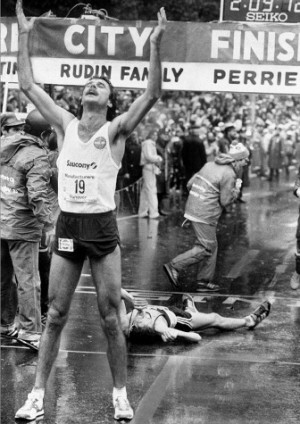 The New York City Marathon is an annual marathon that passes through the five boroughs of New York City. This marathon is considered one of the USA’s premier sporting events. It is the largest marathon in the world with 53 508 finishers in the 2019 race. The race is so popular, that entry to it for the general runner is mostly by a ballot system with most wanting to enter missing out. A particular highlight of the race is the nearly two million spectators who line the course, almost having a party to support all the runners and cheer them on with festivities all along the course. The race is organized by New York Road Runners and has been run every year since 1970, except for two years. The 2012 race was cancelled due to the flooding from Hurricane Sandy and in 2020 when it was cancelled due to the COVID-19 pandemic. The race usually takes place on the first Sunday of November. The 50th running of the marathon is scheduled for the 7 November 2021.

The first race director or organizer was the late Fred Lebow who passed away in 1994. The first race in 1970 only had 55 finishers. He then nurtured the New York Marathon to gradually become the great event that it is. The color, the history, the nature and the electricity of the event was captured in an absorbing 2009 book by the Liz Robbins, a former sportswriter for The New York Times called ‘A Race Like No Other’. Her narrative was around the 2007 running of the event. She followed the stories of both professional and amateur runners along the 26.2 miles of the course as it went through the streets of New York, from the starting line at the Verrazano Narrows Bridge to the finish line which is in Central Park. The book has sold well and captured it all so well.

It was probably the 1983 race that captured the attention of so many, especially a national television audience as it was broadcast live. Geoff Smith from England was leading for most of the way and was caught and passed at the 26 mile mark in Central Park by Rod Dixon from New Zealand. With 6 miles to go, Dixon was two and half minutes behind Smith but crawled back to win by 9 seconds. Just after Dixon crossed the time to celebrate standing, Smith collapsed on the ground. A photo captured that moment and became a famous photo known as the "Thrill of Victory/Agony of Defeat" photo.

The current course record for men is 2 hours, 5 minutes and 5 seconds, set by Geoffrey Mutai from Kenya in 2011 and for women it is 2 hours, 22 minutes and 31 seconds set by Margaret Okayo also from Kenya in 2003. The slower runners are given 8hr and 30 minutes to finish the distance. The Olympic runner Grete Waitz ran her first New York City Marathon in 1978, winning in a then course record time of 2 hours, 32 minutes and 30 seconds.. She went on to win a further 8 races, still holding the record for the most number of wins.

The 45th edition of the Space Coast Marathon and Half Marathon are scheduled for November 27, 2016. Registrations are in full swing for this...

For a lot of guys, self-pleasuring is simply a fun way to bring about a little pleasure and is usually a fairly brief encounter between a...

Following quite a while of escalated work and meeting with London's specialists, coordinators today affirmed the designs for The 40th Race...