Should I Buy a Table Saw Or a Radial Arm Saw? 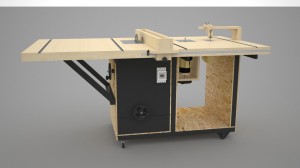 Among other applications, both saws can rip, and both saws can crosscut. The radial arm saw, however, is the undisputed crosscutting champion limited only by the length of its arm. You can visit Best Hybrid Table Saw for reviews and info. Similarly, the table saw is an unparalleled ripper limited only by its workable area (which is determined by the size of the blade opening in the saw table). Ultimately, a radial arm saw's specialty is crosscutting, where the table saw specializes in rip cuts.

Despite their similarities, it is surprisingly difficult for one of these saws to replicate the other's specialty. Because it is generally difficult to keep larger boards (approximately four feet or larger) square to a table saw blade (especially without a sliding panel cutter), it can be pretty darn difficult to perform efficient, accurate crosscuts on a table saw. Likewise, ripping on a radial arm saw is particularly challenging; despite the use of push-sticks or hold-down wheels, operators must still push lumber underneath the motor housing - a task both difficult and dangerous. Rips are additionally challenging with a radial arm saw as, as aforementioned, the rip width is limited by the length of the saw's arm. Also, because the blade's teeth remain in each cut for longer intervals, a radial arm saw has a much greater propensity to overheat during rips in a thick wood. It's possible to reduce this overheating by cutting a deep groove into the saw's table-top, but there will still be an excess of sawdust and a high likelihood of overheating (this, of course, is never good for any tool's motor).

Still, both saws are very versatile in the shop. A radial arm saw, though, is far more useful for applications outside of the sawing realm. It can be fitted for overhead routing applications, surface planing, and drum sanding applications as well. Similarly, most table saws can be fitted with a disk sanding attachment. The radial arm saw though, is also particularly great with dadoes and rabbets providing better blade visibility and a better line of sight than that of a table saw.

The radial arm saw may take the prize for max versatility in the shop, but it is also more difficult to work with and generally less accurate. Cuts are more difficult and time consuming to set up, and the saw itself requires a lot more fine-tuning, recalibrating, and realigning to maintain any degree of comparable accuracy.

Of course, both saws are still precision, high-performance woodworking machines, and both are capable of superior accuracy. However, because the radial arm saw requires more complicated assembly and has a cantilevered arm attached to a cantilevered column (which places a lot of stress on the tool's working parts and components), it is a bit more volatile where accuracy is concerned. By virtue of its design alone, the arm itself poses an accuracy problem almost enticing blade wander and deviation as the arm and its parts wear over time. Similarly, although a table saw is generally heartier in construction, its miter gauge (which may joggle off-mark) may just be its Achilles heel in maintaining optimal accuracy. - It's worth noting here that if your budget precludes you from buying a high quality saw, buying a lower quality table saw is a much better choice than buying a lower quality radial arm saw. Because of the radial arm saw's cantilevered and very complicated construction, its smarter to only invest in a higher quality model.

It is also important for one to consider shop space. A radial arm saw requires far less space to function properly when compared to a table saw. Needing only a few feet of free space to its right and left sides, it can be pushed straight up against a wall. A table saw, on the other hand, is a much bigger machine; it takes up more space and requires more space to function. To use all the features of a table saw, it must be the center of your shop with adequate open space on all four sides of the table.

As with any power tool or woodworking machine, these saws are dangerous to work with. The radial arm saw's blade is perilously exposed above work surfaces and because the blade can swivel and move, it is never in the same place twice. Angled crosscuts can also be especially dangerous as the blade then assumes the same space you might normally keep your hands. The spin direction of radial arm saw's blade also contributes an element of danger sometimes lifting your materials off the saw table during cuts. Similarly, although the table saw's blade is always in the same space, it can sometimes be quite invisible posing a grave threat to your fingers as you work, and although the blade's spinning action is different in a table saw, it can also throw your working materials. Ultimately, it is vitally and inexpressibly important to be safe, careful, cautious, and smart as you work with either of these saws.

When neglected or taken for granted in any way, their bite can be far worse than any bark.

If you are a passionate table tennis player or learner, then along with hard working session on the court, you also need good accessories to...

A game of table tennis is recommended for all ages beginning with little ones to mature. It is a game that requires a fine coordination of...

Though an indoor game, table tennis enjoys immense popularity not only at the level of tournaments, but also among the common folk. The game...