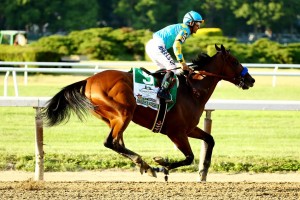 Horse racing is a sport that fans have to pay attention to throughout the year to ensure that they make the most knowledge picks when the biggest races of the season take place.

The biggest race days of the season gravitate all sports fans to make wagers on the action, with the Kentucky Derby remaining the biggest racing event of the year in the United States.

However, the other Triple Crown events also have eyes from around the world on them, while the Breeders’ Cup to close the season also attracts the biggest stars on the flat from around the world. But, which horses should horse racing fans be keeping a closer eye on in 2021?

There certainly won’t be many more popular horses to keep track of this season than Ride A Comet. The six-year-old is trained by Mark Casse, and returned to the track for the first time in nearly 800 days in October last year.

There have always been high hopes for this horse, and that was evident by his win at Del Mar in 2018, as he won by one and a half lengths from Kazan. Many expected the horse to be returned after the extended break from the track, but he returned in the best possible form in October with a two-length victory over Kingly at Woodbine.

On that form, he showed that he is ready to finally fulfil the potential that he has, and Ride A Comet has since backed it up with two more wins in competitive fields.

In November, he picked up another victory at Woodbine before emerging as the winner at Gulfstream Park in January from Casa Creed. The time away from the track seems to have done wonders for this horse, and it will be exciting to see what the target for connections will be in 2021.

Bob Baffert has an incredible record in the biggest races of the season in the United States, as no trainer has won more Kentucky Derbies. You can check here the full list of Bob Baffert’s win in the Derby: TwinSpires.com/kentuckyderby/winners

His leading chance that all gamblers will be keeping a closer eye on throughout 2021 will be Life Is Good. The three-year-old has only been seen on the track on one occasion so far during his career, but the initial signs were indeed very exciting.

The three-year-old won by three-quarters of a length at Santa Anita in early January, and there is every expectancy that the target will now be for the Triple Crown events. Many sportsbooks already consider the lightly-raced contender to be the favourite for the Kentucky Derby, but we will learn more about the talented horse throughout the next year.

Some gamblers may be put off by the fact that Life Is Good has only raced on one previous occasion, which means that there could be support for Essential Quality in all three Triple Crown events.

The three-year-old is also among the front runners for the Kentucky Derby, but has proven form behind him ahead of the Triple Crown season. The three-year-old has won on all three starts so far, which includes a win at the Breeders’ Cup at the end of last year.

That was his most tight-contested victory to this point, as he held on to win by just three-quarters of a length, but Brad Cox certainly has high hopes for this horse.

His other two wins came at Churchill Downs and Keeneland, where he won by a combined total of seven and a quarter lengths. He certainly looks to be one of the leaders when assessing the Kentucky Derby hopefuls at this early stage of the season.

Rebecca Linquist
Show Hospitality to Your Horses: Four Things You Need Before Bringing Them Home

Owning horses is a rewarding experience that can make your Colorado lifestyle more enjoyable. If you’re considering the addition of these...

Even though the Native american pop melodies sector has turned into a aspect and also parcel individuals existence today, the reality is...