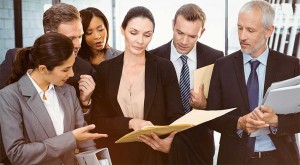 Defendant financiers sought review from Superior Court of the City and County of San Francisco (California), which granted judgment in favor of plaintiff debtors and held that the note and deed of trust executed by plaintiffs were null and void and created no lien upon plaintiffs' property. The trial court further awarded damages to plaintiffs for the false, fraudulent, oppressive, and malicious acts of defendants.

The court reversed the judgment of the trial court, which held that malicious acts of defendant financiers caused note and deed executed by plaintiff debtors to be null and void. The court held that defendant individual did secure plaintiffs' signatures through fraudulent misrepresentations and attempted to exact usurious interest but that remaining defendants were not liable. The court held that an award of punitive damages was not appropriate.

Appellant licensed contractor challenged the denial by the Superior Court of Sacramento County (California) of her petition for a writ of mandamus that sought to set aside a disciplinary action of respondent Contractors' State License Board. Appellant argued that Cal. Bus. & Prof. Code §§ 7109 and 7113, on which respondent relied, did not apply in the absence of a construction contract.

Appellant licensed contractor built a home for her own use. Appellant decided not to occupy the house and sold it to third parties. Subsequently, a covered walkway that was part of the residence was damaged. Appellant contended that the owners were at fault. Respondent Contractors' State License Board initiated a disciplinary action appellant found that appellant violated Cal. Bus. & Prof. Code §§ 7109 and 7113 when she constructed the walkway by willfully disregarding the architect's specifications and accepted trade standards without the owner's consent. Appellant filed a petition for writ of mandamus that sought to set aside the disciplinary action. The trial court denied the petition. On appeal, the court reversed. The court ruled that the disciplinary provisions of the Contractors License Law, Cal. Bus. & Prof. Code § 7000 et seq., were limited to cases in which there was a construction contract between a contractor and an owner. The court found that there had never been any such contract between appellant and the third party owners and that the sales contract between them did not provide a basis for respondent's action against appellant.

The appellate court ordered respondent Contractors' State License Board to vacate its decision that found that appellant licensed contractor had willfully disregarded accepted building standards in the construction of a residence. The court found that as there was never a construction contract between appellant and the third party owners, respondent lacked statutory authority to initiate disciplinary proceedings against appellant.

DUI refers to driving under influence which is classified as a serious crime with serious consequences that can change one's life. By making...

Like the majority of everyday people, you probably are not well-educated on all the details of law. Many of us will, at one point or...