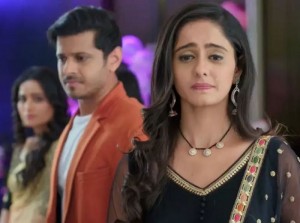 Who wouldn't want to have a kindhearted yet brave daughter-in-law in their family? Someone who would make every small effort in making family members happy yet would be so bold to take her own decisions without depending on anyone. Although brave-hearted girls are always praised in real life, the story of this reel life girl, Sai, makes her in-laws wonder why she is a one-of-a-kind person dealing with life stresses despite her internal wars with the seniors in the family! Yes, Ghum Hai Kisikey Pyaar Meiin has marked the beginning of a new phase in the television industry. And due to Sai Joshi Chavan's praise-worthy portrayal, the daily soap has been acclaimed on numerous counts. Here's how Sai's character makes every audience stay stick to Star Plus at 8 PM in the evening.

Ever since she was a child, she never received motherly love and essence. Although she thanks her upbringing totally to her father (who happens to be a police officer), nothing could ever give her an emotional strength that otherwise a child gets from the mother. But her kindhearted nature has made everyone get attached to her very easily. When she got married to Virat, she never knew which family she was going in. Firstly, a majority of Chavans were not happy with her. But gradually, her kindhearted nature served her gold.

Despite being kindhearted, girls are taken for granted because of their soft hearts. But here, GHKKPM has proved to be one of a kind by portraying Sai as a bold and brave person. Just like how you see in real life, you will get a connection of an Indian girl next door with Sai's character. She is brave to take her own decisions, but at the same time she always maintains a boundary of respect towards her husband and her seniors. But sometimes, you can naturally see her get angry. She's a human being, after all! Learn more from the Ghum hai Kisikey Pyaar Mein Written Update.

Ever since her childhood, she has a wish plucked inside her heart. She wants to become a doctor and despite life's turmoil, she goes the whole nine yards to accomplish her goals. Life has not been that kind to her. She lost her mother, and right after she lost her father, she got married to a complete stranger. She went to his house and managed to spread love in each and every one. Although everyone doesn't like her in the house, she does not lose hope and keep on doing good for the family members. But amidst everything, she prioritizes her career the most and can do everything to achieve her dream. Currently, you will see her as a medical student in the daily soap. Learn more from the Ghum hai Kisikey Pyaar Mein Written Update.

There's a sheer realistic connection of Sai's character with any Indian girl that audiences will experience. The television show doesn't create any drama to overexpose the characters and their significance. That's what is more eye-catching in the show.

To compose a beautiful piece of writing, you need to be aware of numerous aspects. Many of which might seem trivial, but these little things...

Rewriter Tools
How to Make a 3D Character Modeling, Character Rigging and Animation By GameYan Studio

Using your concept art, create 3D Character modeling with Game Development Studio software like Maya. Then, paint your models to give them a...