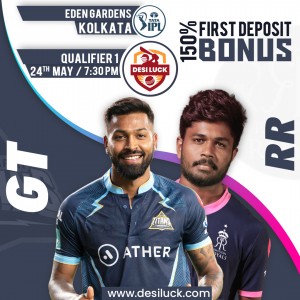 The winner of Qualifier 1 will advance to the final.

Rajasthan Royals are all set to take on the Gujarat Titans in their next encounter in the Qualifier 1 of the playoffs of Ipl 2022. The Sanju Samson-led side is coming off a victory against Chennai Super Kings in their final game of the league stage and the franchise will be looking to continue with the winning momentum into this game as well. They are likely to stick with the same combination.

Gujarat Titans, on the other hand, suffered a loss in their final game of the league stage against the Royal Challengers Bangalore. The Hardik Pandya-led side still has a lot of positives going their way despite the loss and they will be looking to be wiser with their lines and lengths instead of changing the personnel. Alzarri Joseph might replace Lockie Ferguson who did go for a few runs in the previous game.

Traditionally, the Eden Gardens pitch has assisted spin bowlers and both teams have a quality spin attack, which will be a great battle to watch. The skipper that wins the toss will be looking to bat first as the pressure of the chase can be difficult to cope with.

Led by Sanju Samson, Rajasthan Royals won 9 matches and lost 5 out of 14 during the league stage of IPL 2022. With 18 points, RR finished at the 2nd spot in the IPL 2022 points table and qualified for playoffs. RR equalled LSG with 18 points but maintained a better net run rate than them, hence, managed to get the 2nd spot.

IPL season 11 – Bigger and BetterThe behemoth of entertainment is back. No we are not talking about any Bollywood film or the exciting...

Mumbai Indians beat Kings XI Punjab by 3 runs and kept their hopes alive to make it to the playoffs. Bumrah took 3 wickets.