A Guide to the Most Popular Video Wall Technologies 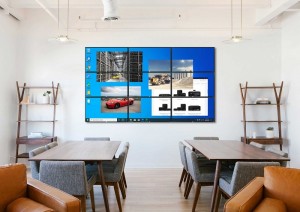 A video wall is also known as a data wall. It consists of many display panels tiled together to form one huge screen. A data wall is linked to a video-wall processor, which serves as the data wall's brain. The processor allows the user to manage the data wall using command and input devices such as a keyboard and mouse.

Data walls are a superior option to a single huge screen since they enable users to personalize active display sections and are also less expensive. In control rooms and command centers, modern video walls with

These technologies are commonly employed.

A modern videowall is anticipated to have great performance, compatibility with sophisticated processors, dependability, and a cheap cost of ownership. This article describes the many forms of contemporary video walls seen in command and control rooms:

These include back-projection cubes as well as a video processor/controller. The projection cubes show pictures using lights. The projection cubes continue to work as long as the lamp is turned on. The lamps used in the current project cubes have a lifespan of around 9,000 hours. Rear projector cubes have a compact footprint - the smaller the screen size, the smaller the depth, and so on. DLP technology is also thought to be more affordable than LCD technology. DLP Video wall malaysia provides many benefits, including high resolution and tiny frames.

LED technology is comparable to DLP technology. It is made up of interlocking back-projection cubes and a video processor. The sole distinction between LED and DLP technology is in the light sources. LED cubes are often more costly than DLP cubes. LED lighting, on the other hand, produces a crisper picture and greater brightness. It also requires little upkeep. The new LED-illuminated DLP technology is becoming a popular alternative for 7/24 applications in command centers and control rooms.

To show pictures, this display technology takes advantage of liquid crystal's capacity to modify light. An LCD is made up of flat display panels that are tiled together and linked to a video processor. Because liquid crystal does not generate light on its own, LCD video walls need backlighting. An LCD video wall may be fixed directly to the wall or incorporated into a free-standing cabinet. LCD panels are available in ultra-thin and ultra-lightweight forms, which save space. The sole disadvantage of LCD panels is that they may need to be changed after a specific amount of time. Video walls are a fantastic tool made possible by digital display technology, but what alternatives do they present. How can you use them to your advantage? Actually, the possibilities are practically limitless.

These are the most popular video wall systems that are compatible with mission-critical operations. Consultation with a qualified audiovisual systems installer is the best method to home in on the most suitable technology for your application. There are several experienced experts in this field that will do a free requirements analysis for you.

Argus HD is a rewarded webcasting productions Company located in San Francisco. It has been in the video production business to help...

1888PressRelease - Eleven children and two young adults produced a one-minute video explaining deforestation and how it impacts the...

In order to make your business successful, you always need right kind of marketing tools and strategies. These days, you can find so many...