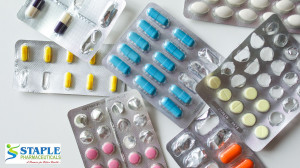 Defects in tablet composition are known as tablet defects. Depending on the experience level, the equipment and excipients utilized, produced, or compressed tablets can have specific flaws that may be seen immediately or after storage. Listed below are problems associated with tablet manufacturing by pharmaceutical companies.

Capping removes or separates a compressed tablet's top or bottom from the tablet's main body. This could happen when the tablet die is being ejected, or it might happen during processes like coating, packing, or shipping.

A. Causes of lamination and cappingB. How are issues with capping and laminating resolved when making tablets?2. Sticking

Sticking is when a small amount of compact material adheres to the faces of the tooling surfaces. The issue worsens as more material is added to what is already adhered to the punch face, as compacts are frequently created in this tooling station. Upper punches appear to be more prone to the issue.

A. Causes of stickingB. How to avoid sticking when manufacturing tablets 3. Picking

When a piece of the tablet sticks to the punch surface and begins to erode from the tablet surface, picking occurs. It is a more precise name for a product clinging inside the characters, logos, or patterns on the punch faces.

A. Causes of pickingB. How to avoid picking when manufacturing tablets

This frequently occurs when using colored granules. An uneven color distribution on a tablet with light and dark spots is called mottling.

A. Causes of mottlingB. How to stop mottling when making tablets5. Chipping

Occasionally, compacts are discovered to have little chips missing from their edges after being removed from the press or during later handling and coating procedures. This flaw, known as "chipping," may also be brought on by compaction issues that result in tablets that are excessively brittle or too soft (low mechanical strength), in addition to the apparent formulation flaws.

A. Causes of chippingB. How to stop tablets from being chipped during production

6. Binding in the die

The compact edges that are produced have rough, scored edges due to severe side scraping of the die and strong compact ejection forces.

A. Causes of binding in the dieB. How to stop the die from binding when making tablets7. Embossing

This is due to the tablet's imprint or spur line being unclear.

A. Causes of embossingB. How to stop embossing while making tablets8. Double Impression

Only lower punches with a monogram or other engraving are used in a double impression. During the ejection operation, the punch may leave two impressions on the surface of a tablet. By implementing anti-turning mechanisms for the punches, this can be prevented.

The pharmaceutical industry presents challenging manufacturing problems and solutions for tablets because the tablets' appearance determines the product's overall quality. With a specific tablet defect solution, the quality of such items can be reduced.

If you are finding flaws in the design and construction of your home then there is nothing to worry as you can find the person responsible...

With the advancement in technology, the electronic devices are becoming popular. From the young children to the old age people, everyone can...