Reasons World News Matters To Everyone 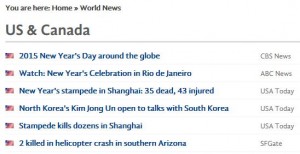 There are many people who prefer to skip the news altogether while others only have a minor interest inlocal events or matters that are of concern to them personally. One of the most significant reasons for taking the time to keep up with world news headlines is that what happens somewhere else today could have an impact on what happens in your own life or country in the near or distant future. People often mistakenly believe that topics that are covered in world news headlines only impact certain parts of the world. In reality, a number of these topics can impact many lives in many countries as well.

For decades, people in the United States had only occasionally heard about the deadly Ebola virus and the high death toll associated with this disease in Africa. Last year, however, when Americans who had contracted the virus were sent back to the United States for treatment, many began to realize how this disease could reach beyond the borders of Africa. Today, as the outbreak that is considered the worst, and most complex in history, continues to impact parts of Africa, many people in the United States, and around the world for that matter,now follow developments about this disease more closely than they had in the past.

There’s no denying that the climate has seen some dramatic changes around the world.¹ In fact, an unprecedented warming trend is taking place and scientists have used the most advanced technology to study the signals that humans are the ones causing this. Carbon dioxide, which traps heat against the earth, exceeded the maximum levels that had existed over a 650,000-year period in 1950, and it continues to grow at an exponential rate. Additionally, ice cores taken in Greenland and Antarctica show that changes have occurred in response to greenhouse gas levels. Temperatures on land and in oceans have increased, and while the volume of ice sheets in Greenland and Antarctica has decreased, sea levels have risen. No other topic has more of an impact on the world as a whole than that of climate change.

It is getting more and more difficult to remember what it’s like to fuel up at the pump without emptying your wallet. Suddenly, the price of oil has decreased and so have the prices at the pump.While the impact of the situation is a complex one that affects a number of countries which produce and purchase oil, the bottom line is that it has become more affordable for many people to drive to more places and to take trips that have been placed on the back burner for so long.

News is about providing all types of information to all types of people. Keeping up with World News Headlines is the best way to stay informed on all the issues that can not only impact you, but also impact the country that you live in and the world as well.

Read all the latest banking and finance industry news at FinanceDepth to gain insights into the economy news, banking

FinanceDraft is the leader in providing the highest quality and updated news about government finances, public financ

Take a look at the latest international market data news and get the overview of the impacts of currencies in the finance headlines market.