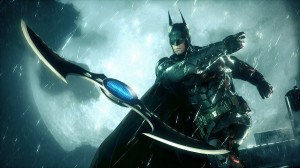 The story in Batman Arkham comes one year after the unfolding of events in its predecessor Batman: Arkham City. It begins after the death of the Joker and closure of Arkham. Bruce Wayne, while nursing old wounds, is beginning to wonder whether Gotham really needs his services anymore and just then, a new villain emerges to spur Bruce back into hero duty once again.

The game is compatible with Xbox one, play station 4, Microsoft Windows and mac operating system. The minimum requirements for pc version of the game is Microsoft Windows 7 an AMD Athlon 64 X2 Dual Core 4800+ / Intel Core 2 Duo E4600 2.4GHz processor, a 2GB ram and a hard disc space of 25 GB. The recommended requirements features a AMD Phenom II X4 965 / Intel Core i5-750 Quad 2.66GHz processor, a RAM of 4 GB and a hard disc space of 25 GB.

The resolution and the frame rate haven’t been decided upon yet but the Rocksteady Studios have stated that they are considering the possibility of going for similar graphic elements across all the platforms. Compared to its predecessor, the graphics in the game have improved. They have been optimized to produce more realistic textures for a richer gaming experience. To be able to defeat the new enemies, Batman’s combat system has also been improved. A new move, Fear Takedown, which allows Batman to handle bullets even from up to three gunmen at a time has been introduced into the combat system.

The game will be released worldwide on June 23rd 2015 on PlayStation 4, Xbox One, and Microsoft Windows. It was initially set to be released on 14th October 2014 before the date was pushed to 2nd June 2015 and later to the 23rd. Batman Arkman Knight could be start of something new. The new graphics and the attention to details are guaranteed to suck you into the moment. For Batman fans and for any serious gamer, don’t just check out, the Batman Arkham Knight Sneak Peak look out for the real game in June.

For a more, in depth look at Batman Arkham Knights, check out: http://www.areyougaming.com/i/batman-arkham-knight-preview

Long live gaming. I've been a gamer since I can remember and I really do enjoy sharing my gaming experiences. You have any questions about video games or gaming in general, don't hesitate to ask.

Whether you are a comic book geek or not, you cannot deny the fact that the caped crusader happens to be one of the coolest superheroes of...

Batman is a fictional character which gained its popularity after the release of the movie series, Dark Knight. Youngsters as well as adults...

If you’re planning to buy Batman printed t-shirts as a gift for a family member or a friend, you might need a little help knowing exactly...