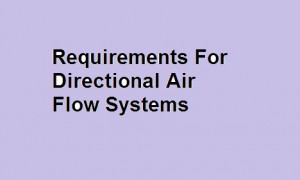 Clean, contaminate and particle free, fresh air is critical for certain environments which may include manufacturing operations, clinical and biosafety laboratories (BSL), operating rooms, and data centers just to name a few. The need to maintain directional airflow at every instance and the magnitude or airflow needed will depend on individual circumstances. For example, the typical "clean room" is usually designed to protect the product and not the employee. This may translate to having directional airflow and pressure control requirements which limit the movement of contaminants into the clean room. The FDA's current Good Lab Practices (cGLP) governs all pharmaceutical laboratories by implementing strict control requirements.

Some industry experts recommend a 10% "offset" in ventilation rate with lab exhaust being 10% greater than the lab supply air as a means of maintaining negative pressurization in the laboratory and keeping air flowing from the corridor into the laboratory. For example, a lab with 10 cfm (472 L/s) of exhaust would have 900 cfm (425 L/s) of supply air and 100 cfm (47.2 L/s) coming from adjoining spaces. A general rule of thumb is to design the space with a 10% offset and it may not be adequate to maintain directional airflow and pressurization similarly to opening a lab door.

The amount of offset should be based on:

If the requirement is stringent, two seldom considered factors become important. First, if there is any appreciable temperature difference between the lab and adjoining space, a thermal exchange will occur when a door is opened so that there is warmer air at the top of the doorway and cooler air flowing in the opposite direction near the floor. To inhibit this exchange an airflow velocity of at least 50 fpm (0.25 m/s) is needed.

Secondly, the air volume needed to control airflow through a door in this way is dependent of the size of the room o its need for supply or exhaust air and is only related to the number and square footage of doors into the laboratory.

Consequently, if the requirements are stringent, an airlock door is the only current available solution. In the absence of an airlock, an arbitrary 10% offset of the lab ventilation rate is not the proper basis for design.

Airlocks are required for the prevention of undesirable airflow from one area to another in high hazard arduous applications or to minimize volume of supply air. If the door phenomenon is not considered, there will be no safety isolation when the door is open. In many labs, momentary door opening to allow the movement of materials and personnel in and out of the lab will not cause a significant safety condition because of the short duration of time for any contaminants to escape from the lab to the corridor. Where the toxicity of the escaping contaminants would be a concern during the 15 second opening of a door, then double door airlocks should be employed. However, for both fire contaminant reasons and hazardous materials contaminant, lab door should be closed except when in actual use. The speed of response of the lab pressure controls should be in proportion to the danger of the hazardous material contained in the lab. For most labs, speed of response should be in the range of 0.5 - 3.0 seconds.

There are such applications such as the collective-protective shelter used as a field hospital in the event of a natural or man-made disaster and for the preservation of non-contamination for both personnel and the public. In another, the BSL or a laboratory for animal research, for example, requires that standards are met and maintained constantly and not just during the process or procedures.

In February 16, 2012, a multi-million dollar bioterror germ lab at the Centers for Disease Control and Prevention (CDC) in Atlanta, Georgia was reported as having serious and repeatable problems with their airflow systems. The area of the building where the problems were reported involves a biosafety level 3 lab (BSL) which is used for experiments. The lab experiments involved anthrax, dangerous strains of influenza, SARS, corona virus, monkey pox, and many other bioweapons. The air from inside a potentially contaminated lab briefly blew outward into a "clean" corridor where a group of visitors weren't wearing any protective gear which raised concern about exposure risks, according to e-mails reporting and discussing what happened. Research animals in the lab had not yet been infected at the time of the incident, the records say.

At the time, CDC refused any comments and would not respond to any written requests either. The agency's 11-story Emerging Infectious Diseases Laboratory, CD Building 18, is known as a high-containment lab and animal-holding area. Federal safety guidelines require all BSL-3 labs to have a sustained directional airflow by drawing air into the lab from a "clean" area towards the assumed contaminated area. The airflow system is responsible for protecting against exposure to microbes and the potential for airborne microbes and to guard against infecting staff members and the surrounding community from the spread of a disease. Some of the witnesses at the CDC have complained anonymously to management and officials with concerns for such a catastrophic incident and the potential exposure to workers. One witness said that the CDC would go so far to hide the facts that they would do anything.

Having adequate airflow and following the most stringent and relevant standards for all types of labs is more important today than at any other time in history. As long as terrorism exists and the potential to weaponize it, the BSL will become more necessary for the research into how to prevent a future catastrophe.

Tips to Help You Hire the Best Directional Boring Contractor