Are New Homes in the UK Large Enough for Everyday Living? 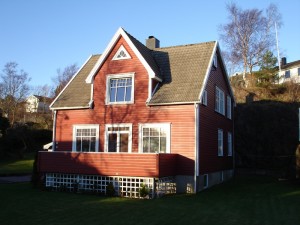 The Royal Institute of British Architects (RIBA) have been involved in a long-running campaign to bring to the public's attention the lack of adequate space for everyday living in new homes being built in the UK today. A RIBA/IPSOS Mori report entitled "The Way We Live Now: What People Need and Expect from their Homes" revealed that a substantial proportion of new homes in the UK do not have adequate storage space for the basic requirements of a family, including food storage and household appliances.

A range of families across the UK were interviewed for a study by the Royal Institute of British Architects (RIBA) who have been involved in a long-running campaign to bring to the public's attention the lack of adequate space for everyday living in new homes being built in the UK today. A number of people reported storing food and household items in the boot of their cars because the available storage space in their homes was simply insufficient. Yet others stored their vacuum cleaners permanently in their living spaces due to a lack of adequate storage space. It seems that it is becoming increasingly difficult for a family to store their basic possessions in a typical new-build 3-bedroom "family" home. Yet ask many prospective buyers of new homes and they can come up with 101 reasons for buying a new home rather than one that has had previous owners. Even with our love of DIY and home improvement there is something very attractive about a home in which this is a choice rather than a necessity.

The report also provides important evidence to reinforce the general public's perception that new homes are simply not large enough and it aims to instigate changes in the way new-build homes are planned and marketed. The report reveals in detail how poorly planned and how cramped many new homes in the United Kingdom are. It is intended that this RIBA/IPSOS Mori Report will be used by the Future Homes Commission, which is researching the quality of new homes being built in the UK today, including from the perspective of storage space and space for everyday living, particularly for families.

It is recognised that space is a very important issue when you are buying or renting a new home because a lack of space impacts substantially on basic lifestyle needs such as storing personal possessions, living comfortably with our family and entertaining our friends.

New homes in the UK have been revealed to be substantially smaller than the rest of Europe and the USA where homes are generally marketed based on the available living space as a measurement in square feet (or square metres) to help the consumer more easily assess value for money. In the UK homes are still typically sold based on the number of bedrooms and reception rooms, which can be misleading figures in terms of the comfort and ease with which a family can occupy a home.

Shockingly, RIBA discovered that the floor area of an average 3-bedroom new build family home in the UK is a mere 88 square metres. This is 8 square metres less than the minimum floor area recommended by the Greater London Authority in July 2011 in their report "The London Plan: Spatial Development Strategy for Greater London". This shortfall in space is the equivalent of a single bedroom with room for a bed, bedside table, wardrobe, desk and chair. But because this is an average figure there are many new 3-bedroom houses that are even smaller and fall short of recommended space by the equivalent of two double bedrooms. The introduction of minimum standards for space in the capital are an effort to ensure new homes have enough storage space in London, in particular, where the problem is most acute, but there are currently no UK-wide standards. The issue of space and adequate storage in London is even more pressing than in the rest of the UK because of the high cost of land and property.

The author has written and published articles on a wide range of topics including Small Business Advice, Tax and Accounting, Interior Design, House Renovation and Project Management.

In summary, there were 124 homes listed for sale by Realtors in all of Groton including Groton Long Point, Noank, Mumford Cove and the...

Modular homes and mobile homes should not be thought of interchangeable properties as they're both different types of homes completely...

Alex Berlin
Home Design - UK vs. US vs. Australia

Besides speaking a common language, with a few interesting variations, the United Kingdom, the United States and Australia host highly...