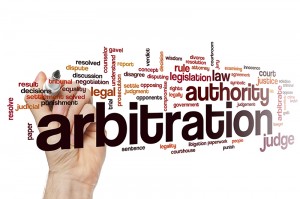 Under normal circumstances, it is presumed that Arbitration procedures have been complied with by all concerned parties. The burden of proof to prove the contrary shall fall on the party claiming so. Adjudication on this issue shall be solely based the contents of the arbitration award and its details.

The claimant filed a civil case in court requesting to appoint an arbitrator to settle a dispute with the respondent in accordance with provisions of the share transfer contract they had entered into. The said contract provided that disputes arising from it shall be settled through arbitration proceedings, with the arbitrators being appointed by the court.

Accordingly, the court appointed the arbitrator who issued an award on a conclusion of arbitration. Claimant then proceeded to request the court to ratify the award. Respondent, on the other hand, requested the court to nullify the award. The Court of First Instance accepted the claimant's request and passed an order ratifying the award.

It was submitted by the appellant that the Arbitrator in the arbitration proceedings did not conduct the proceedings personally. It was alleged by the appellant that the Arbitrator's role was only to sign the minutes of the hearing and the procedures. Further, it was submitted that all processes and procedures involved in arbitration were in fact conducted by the assistant to the court-appointed an arbitrator, thereby making such procedures null and void.

Furthermore, the appellant alleged that even the signature contained on the award was done by the abovementioned assistance. Accordingly, the appellant argued that the Court of Appeal had erred in its judgment by not accepting the request for a forensic examination of the signatures on the award or to have the Arbitrator's statement taken on oath. The appellant further argued that requests to produce witnesses to show that the arbitration procedures were done by the arbitrator's assistant were also refused by the Court of Appeal. The appellant stressed on the above grounds to establish that the arbitrator was not competent to issue the award was issued.

Nullification of an arbitration award will be exclusively subject to satisfactory occurrence of conditions mentioned under Article 216 of the Civil Procedures Law of the UAE; whether it is relevant to arbitration agreement or the arbitration procedures; whether the final award was issued by a competent arbitrator or a tribunal in absence of others; whether the final award was issued on the basis of expired terms of reference; or if the arbitration agreement was executed by a party not having the legal capacity to do so; whether both parties were given equal chance to present their cases; or if there was annulment of award/procedures affecting the award.

It is well established that arbitration procedures would be presumed to have been conducted correctly. Adjudication of any contrary claim shall be based on what has been stated in the arbitration award. In this case, the court held that it was clear from the minutes that the arbitrator had attended the hearing as the petitioner had not objected the minutes and had signed it. The court accordingly ruled that the requests to have the arbitrator's signature checked forensically or getting a statement under oath did not merit legal recognition.

Surprise in this case

It was observed by the Court of Cassation that claimant and the lower court had erred procedurally with regard to the ratification of the arbitration award. When the arbitrator submitted its award the claimant proceeded to request the same court which appointed the arbitrator to ratify the award without filing a separate case. The Court of Cassation held that this was a procedural mistake and thereby ruled that ratification order shall stand voided. However, the court clarified that the arbitration award is valid and may be ratified by the claimant by filing a separate case for this purpose.

The UAE has rapidly emerged as a leading financial centre, attracting large global investors and businesses. As international developers and...