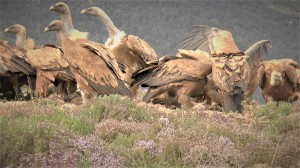 Nature develops a particular media to keep it clean and fresh. This happens naturally and does not harm the human environment. Among the natural cleaners of the of the world, vulture plays a very important role all over the world- especially at India in South Asia. Previously vultures ate up lots of dead bodies of different animals like cows, Buffalo, goats and so on. In this way, vultures not only used to keep the environment clean but also balance the ecology. Actually, this feathered friend of human-environment has long been being disturbed and killed in various ways. This affects the total system of the environment of this particular area.

Vulture is an Altruistic Scavenger that is it lives on the dead animals and it never preys the living animals. They have a very exceptional stomach which is by nature very much corrosive. This happens because an acid bath occurs in its stomach. For that reason, vultures can digest the corpses of the animals which died of deadly diseases like cholera, anthrax, rabies, and botulism. These types of corpses are very much dangerous for most of the scavengers.

Actually, vultures are very much hygienic animals though they have the very cadaverous appearance. Nature has created vulture to keep the environment disease free. Their heads and necks are naked and as a result, they can dig very deep in the dead animals decomposing body. And this very quality allows them to avoid bacterial adhesion. For that reason, their external body is always kept clean which is very remarkable. Around 12 million tons of rotting water buffalo, goats and cows were eaten up by vultures every year. But now this huge amount of dead bodies are rotten under the open sky and in this way they work directly to pollute the nature. At the same time the possibility of spreading various diseases.

Their extinction and reasons

To survive in the world vultures need some environmental support. They need particular climate to live in. thus, Vultures are found in Africa and Asia because the climate and environment of these areas are suitable for the survival of vulture. But it is a matter of great sorrow that in both areas some human-made factors are responsible for the abolishment of the species. In Africa, they are getting vanished especially for two reasons. Firstly human being killed them indiscriminately for flesh and at the same time they were killed for religious purposes.

On the other hand in the Southern part of Asia, especially in India, the extinction of vultures is caused for a different reason. Generally, three types of vultures are available in India. They are white-rumped, the slender-billed and the long-billed vultures. In this area of the world, people frequently feed their domestic animals an anti-inflammatory drug named Diclofen, which is at the same time Nonsteroidal. This drug is used for removing arthritis symptoms of cattle and water buffalo. When these cattle die and vultures take the body of a recently treated animal, it causes their acute kidney failure. This one reason frequently caused a massive reduction of the number of the vultures. The white-rumped vultures are declined highest. 99.9 percent of vultures disappeared from 1992 to 2007.

The havoc that is caused by the extinction

Very naturally nature has already taken its revenge with its human counterpart. The extinction of vulture especially in South Asia has caused huge havoc. The direct effect is that vultures eat up the body of an animal affected by rabies. But as the vultures are declined in this region, the infection of human rabies has increased. Now rabies is the tenth cause of human death by infection worldwide every year. Around 50,000 to 60,000 people are dying from rabies infections all around the world. In India, the number is 20,000 to 30,000. And $34 billion is the cost in Indian economy for the destruction of vultures.

A research has been run in India recently on the cause of the spreading of rabies virus. It has been found that the rate of dogs has been increased in India and at the same time, the number of vultures is decreasing. The result is that the rabies virus is affecting more there and more people are dying. So, the havoc caused by the death of vultures is beyond imagination.

Things have been started to change

The Indian government has taken the issue seriously. They had been trying to find out the solution. Several studies have been taken place. At last, the government of India has declared the use of diclofenac as illegal. It was outlawed in 2006 for veterinary use. But people were still using it illegally to treat livestock. Same was the case in Nepal and Pakistan also. There the massive use of Diclofenac has affected the environment.

But it is a matter of great enthusiasm that the things have been started changing. Research biologist Rhys Green has conducted a study in India. He examined more than 6000 left organs of the dead cattle as samples. He collected those from the livestock carcasses of India. He has found that the level of Diclofenac has been started to lessening by 50 percent. On the other hand, another animal anti-inflammatory drug Meloxicam has been increased in the bodies of the dead animals. It has risen by 44 percent.

I am a product review writer. And Editor of https://protechbound.com

Get Expert Advice For Jammu And Kashmir Tour Package

Kashmir Tour Package and immerse yourself in a very complete new non secular and social encounter. There isn't any alternative location kind...

China continues to lead the Asian Petcoke Market share during 2018-2023:China is the major

Rohith Koluguri
What is Visa On Arrival?

Travel is one sure short thing which everybody has in the list. Some follow it as a passion while others like a hobby. You are willing to go...