Can Golf Video Games Help You Improve Your Golf Game? 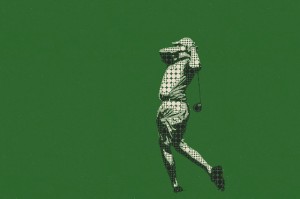 Can a golf video game help you improve your game? Research has shown the answer is yes, it certainly can. Advancements in video game technology make it possible to practice playing golf and to grow your skills – or at the very least keep them at the same level.

Playing golf video games may not be the same as going onto a golf course and playing a full 18 holes, but it can certainly give you much needed practice.

How Do Video Games Help You Learn?

The International Journal of Gaming and Computer-Mediated Simulations reported on a study that found proof playing video games can help golfers improve their game. The study contained 161 subjects and placed them in three groups. Group number one played "Tiger Woods PGA Tour" on the Nintendo Wii entertainment system. Players played the video game using a kinesthetic motion sensor to putt with.

After playing video game golf, or not playing at all, participants were given the chance to putt on a small golf practice green. Researchers found the golfers who had played "Tiger Woods PGA Tour" with the motion-sensor controller received the best results. The groups who didn’t us the kinesthetic motion sensor to play the video game did not play as well on the practice green.

What Did the Research Find?

The research results found the putting motion in the video game replicates real putting behavior. The motion and pre-putt routine closely resemble real golf situations. According to one of the study’s researchers, Edward Downs of University of Minnesota-Duluth, participants who had 18 holes of practice with the Wii putted far better than those who played the video games with traditional controllers for 45 minutes and the participants who had no practice at all.

One of the issues with the research was it only focused on putting. Putting involves a few elements that other areas of golf do not. Most significant is the concentration it takes to putt. It is also just one part of the entire golf experience. But can golf video games help you improve other areas of your golf game?

It is believed motion sensors can help golfers improve other areas of their game such as tee shots. Golf simulators are very similar to video games and many golfers use them during the cold, winter months when they cannot get out on the golf course. In fact, students training for a career in golf often use simulators. The great thing about a golf simulator is you can buy one for your home if you have the money. If that isn’t an option, some golf facilities offer you the chance to practice on a golf simulator.

A golf simulator is not a Nintendo Wii or a cheap alternative. The devices are high-tech with realistic graphics and sensors in the screen. Unlike a video game, a golf simulator attempts to replicate the game of golf as closely as it can. The golf simulator’s swing pad is made with AstroTurf and a tee is provided to hit from. Everything is in place to give you an authentic golf experience.

Is a golf simulator the same as a video game? Well, no it isn't. A golf simulator is replicates a round of golf by putting players through an exact simulation of 18-holes. Players use their real golf clubs and balls. Video games like "Tiger Woods PGA Tour" on Nintendo Wii used a controller that replicated the activities. You do not really hit the ball with real golf clubs. Although they seem the same, there are differences.

A golf simulator’s information is collected from the ball hitting the screen. Video game golf data is collected via the motion sensor controller. Neither is exact.

Should You Use a Golf Video Game to Practice?

Based on the initial research published by International Journal of Gaming and Computer-Mediated Simulations, it shows video games can help you improve your golf game. Will you improve your handicap? You may, but video games won’t replace actually going out on to the golf course and playing 18-holes.

If you cannot get to the golf course or the weather prevents you from playing a round, a video game with motion sensor controller can help. While your drive and chip may not improve greatly, research has found your short game can get a boost.

Hey! I`m Kadir Tuncel. I finished University of Sakarya with a specialization in International Relation. Now I live in Istanbul and practice skills received there. Also, I`m interested in traveling. My dream is to get 8 hours of sleep every day.

The most apparent benefit of mini golf Perth is physical activity. Mini golf is also known as miniature golf or putt-

You probably remember playing some fun video games as a child. Each generation continues to enjoy gaming and the video games themselves are...

Golf was first played back in 15th century Scotland. It is a game with a long history and a long way to go before you can master the game...