Ancient Tombs Of The Nobles In The Valley Of The Queens 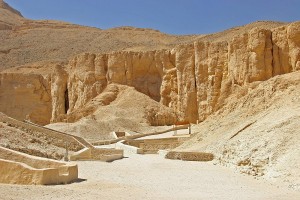 In the Valley of The Queens, tombs were cut into the hills from the 19th Dynasty onwards for the princes, queens and some royal children of the Ramesside kings, who ruled during an era known as the ‘Ramesside period’.

In ancient times, the Valley of the Queens – the second great royal cemetery after the famous Valley of the Kings – was known as Ta-Set-Neferu, meaning –"the place of beauty". It is located about 1.5 miles (2.4 km) west of the mortuary temple of Ramses III (1187–56 BC) at Madinat Habu.

There are about 75 tombs in the valley. They usually consist of a small antechamber followed by a corridor that leads to the burial chamber, but only a few of these tombs were beautifully decorated; most suffered extensive damage from looting, vandalism and flooding..

One of the largest and most spectacular tombs in the Valley of the Queens, is the resting place carved out of the rock for Queen Nefertari (1290–1224 BC). The tomb – discovered by Ernesto Schiaparelli, an Italian Egyptologist in 1904 – was commissioned by Ramesses II, credited with building of many temples and monuments including the two rock temples at Abu Simbel. Nefertari (‘beautiful companion’) was the first of the Great Royal Wives of Ramesses the Great and one of the best known Egyptian queens, next to Hatshepsut, Cleopatra and Nefertiti.

Queen Tyti ‘s sarcophagus chamber is another fascinating burial place, located to the south of the Theban Hills. It is designated QV52 in the Valley of the Queens. Tyti (or ‘Thiti) had many titles such as ‘King’s Daughter’, ‘King’s Sister’, King’s Wife; King’s Mother’,’Lady of the Two Lands’.

However, her tomb has long been a mystery, because it does not record who she was, or the name of the king with whom she was associated.

On the tomb’s walls, there are depictions of Tyti as a young girl and as a middle age lady.

He is also shown before Thoth and the four sons of Horus guard the burial chamber.

Among other paintings, there is one depicting Tyti in the company of gods and goddesses.

She shakes a sistrum before Horus, ("Heru" – ‘the distant one’), one of the most important ancient Egyptian deities, worshiped from at least the late prehistoric Egypt until the Ptolemaic Kingdom and Roman Egypt.

Her burial chamber has jackal and baboon paintings.

Yet another tomb – discovered in the Valley of Queens in 1903 and completely looted – belonged to Amenhirkhopshef, a crown prince, a son of Ramesses III, who died when he was only a young child; in his tomb, the wall paintings are well-preserved.

Valley of the Kings - Egypt

The Valley of the Kings is where the modern myth of Egypt began with Howard Carter’s discovery of Tutankhamun’s tomb, complete with all of...

Mohamed Ahmed
Things to do in Luxor

Luxor or Thebes, the richest and the most important archaeological site in ancient Egypt. It locates about 760 Kms south of Cairo. Thebes...

Martina Daniel
Things to do in Luxor

Luxor TempleLuxor Temple remains the most impressive of the temples in ancient Egypt due to its simplicity. It has a unique orientation for...