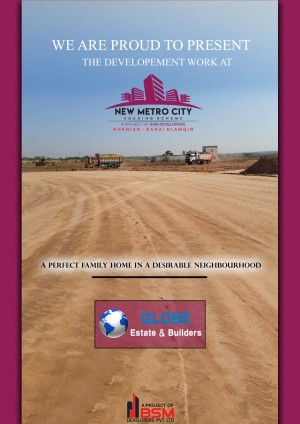 It is designed to be a luxury housing project that offers the highest standards for design & health and provides its tenants with all the modern luxuries and facilities of life.

Pre-launch booking is open and in 3 years installment plan different sizes of residential plots are offered.

BSM Developers is a well-known firm owned by Mr. Malik Bilal Bashir, Malik Riaz Hussain's grandson. In its mega-housing scheme called "Gwadar Golf City," which is considered to be one of the best housing projects in Gwadar, the developer has demonstrated its expertise and professionalism by delivering fast-paced quality development work. New Metro City is BSM Developers' second-largest housing project in northern Punjab, generating a lot of positive feedback from realtors & developers across Pakistan.

For this housing project, BSM Developers has bought ample land and all the meticulous groundwork on its master planning has been completed already. Even before the official launch, which comprises more than 2,500 kanals of land, the first phase of development was initiated.

The project's front on GT Road is about 500 feet, while the remaining area is on the back. TMA Gujrat's initial planning approval has also been obtained, so the project is all set to start after the final NOC is released.

New Metro City is ideally located on GT Road, in Gujrat District, between Sarai Alamgir & Kharian. GT road is the busiest artery that connects various Central & Northern Punjab tehsils, making society easily accessible from most cities and districts. The land lies between the rivers of Chenab and Jhelum, and because of the scarcity of modern neighborhood facilities, it is one of the best locations for a modern housing project.

In its pre-launch booking package, the organization offers a variety of residential plot sizes. On the basis of 3 year installment plan, 5 marla, 7 marla, 10 marla and 1 kanal residential plots are offered on the first-come-first-served basis. Bookings continue with almost 15 percent down payment and 10 percent down payable at the time of the vote, while 75 percent up to 36 monthly installments payable in 3 years.

The plots can be found in the following sizes:

New Metro City is planned to have all the modern features and facilities that one would aspire to in the world of today. In addition to green & clean environment and continuous supply of utilities, there are a few other special amenities that may appeal to potential purchasers:

As the developer is committed to delivering the best quality services in this housing project, much more planned features will be revealed over time.

Globe Estate & Builders is officially appointed as an authorized dealer & marketing partner of "New Metro City". Director of BSM Developers/New Metro City "Zarood Masood" has awarded them with the shield.

India is a country where most of the population prefer traveling by public transport rather than their own vehicles because of its densely...

Konkan Railway and Delhi Metro are undoubtedly one of the biggest and most challenging infrastructure projects that India has undertaken and...