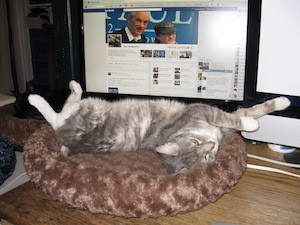 I have several books written by veterinarians or others claiming expertise on cats and feline behavior, and one thing that most of them agree on is that it's not a good idea to take a feral cat into your home.

However, while I agree with much of what they say about the problems associated with trying to make a house cat out of an animal that has never known the love of a human being, I disagree with them when they insist that it isn't worth the bother. When I moved from Texas to Maine, my wife and I took in a feisty little gray and white feral kitty whom I had been feeding for a couple of years. She was young when I met her, but she was beyond the age of a kitten, and she lived with us for twenty years before death took her, and she will always be one of my most memorable pets. I am telling the story of how I came to adopt her, along with tips for taking in a feral cat in a thread in my Senior's Forum, entitled, Taking in a Feral Cat, which I invite you to read, as I won't repeat it here.

There are problems associated with taking a feral cat into your home, however, and I won't pretend that it's for everyone. I'll discuss some potential and likely problems in a moment, but first, it's important to differentiate between feral cats and stray cats.

What is the difference between a stray and a feral cat?

A stray cat is one that once had a relationship with a human being, and was probably raised in a home. For whatever reason, that relationship no longer exists. An indoor cat may have gotten out, panicked, lost her bearings, and found herself having to fend for herself. Sadly, a lot of cats are dumped by owners who may have wanted a kitten but were unwilling to care for an adult cat. Sometimes, when people move to a place where cats are not allowed, they simply leave their cats behind. Whatever the circumstances, a stray cat has once had a relationship with a human being and has a history of having been socialized. A feral cat has not.

In time, a stray cat may develop characteristics similar to that of a feral cat. An unaltered stray is very likely to procreate, and the kittens will be feral. In neighborhoods, feral cats tend to accumulate in colonies where they are able to find a source of food. These colonies tend to be a mixture of feral and stray cats, as people often dump their unwanted pets off where they believe they may find a home. It can be difficult to tell the difference between the strays and the feral members of such a colony, but a cat that seems to have an interest in interacting with a friendly human being is likely to be a stray. Of course, even a feral cat will come to recognize a source of food. A stray cat can readjust to living with people without a great deal of difficulty, and a feral kitten under the age of eight weeks can be easily socialized. With an older feral kitten or cat, adoption will be far more difficult but it will not be impossible, although you should note that many experts insist that a feral cat cannot be socialized.

The difficulties of adopting a feral cat

Keep in mind that while the cat may be living a hard life in the wild, that is the only life she knows. That is her home. If you have been feeding her in the wild, she has probably come to view you as a source of food, but that doesn't mean that she wants to come home with you and she doesn't even know what it means to establish a relationship with you. She will be scared, she will be angry, and she will probably fight back if you try to capture her.

Of course, it's possible that you will be hurt too. Even after a feral cat has been socialized, and has come to love and accept you, the feral cat can never be taken for granted. Just as people who have suffered trauma might act unpredictably, due to a diagnosis known as post-traumatic stress disorder (PTSD), the formerly feral cat suffers from the feline equivalent of the same disorder. A friendly play session could end in a sudden lashing out as something clicks inside the cat's brain. While the acclimated cat is likely to come out of it quickly, there could be some scratches involved. In my experience, as the years go by these episodes become further and further apart, and less violent.

In all likelihood, the feral cat will never be quite the same as one who has been raised in a loving home. Then again, isn't every cat an individual?

The upside to adopting a feral cat

Why then, would anyone want to adopt a feral cat? To be honest, most people shouldn't adopt a feral cat. For those who have the patience, and are willing to put up with the difficulties, the feral cat can become a loving friend, one who was demonstrably grateful for the new life that you have given her. I have had cats all my life, and I can think of characteristics that set each of them apart from the other, but I have never had a cat who was as fascinating as my formerly feral kitty. Yes, she was a challenge but I was up to it, and she was worth every bit of it. Her purrs were louder, and every moment of affection was meaningful.

She wasn't merely a companion or a pet; she was a project. Cats who are adopted from a pet shelter are referred to as rescue cats, and we're encouraged to feel good about ourselves for having rescued such a cat. When you take in a feral cat, you know what you are rescuing it from, and that cat will learn to appreciate it too. Through my little gray and white feral kitty, I was able to form a deeper appreciation of all cats, and I will never forget her.

Ken Anderson is the administrator of the Seniors Only Club forum, an online discussion forum for people fifty years old or older.

If You Have A Cat, Read This Article

Cats are interesting, unique and make for a family member to share your home with. They're perfect for people who are very busy. Use the...

Sure, we have chew toys and balls for dogs, but what about for your cats? We can't just leave them at home scavenging for household items...