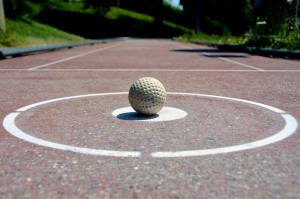 Golf has a language all its own, and it can be confusing for new golfers to understand everything people say. We've rounded up the 10 most widely used golf terms and their meanings for you below.

The term fore is a shortened version of before. Before is a synonym of ahead. This means that fore literally means to look out ahead. Golfers will yell out this term immediately after they hit an errant shot. Yelling fore lets other golfers in their vicinity know that a ball might be coming toward them.

Known as a specialty shot, you play the flop shop to get your ball to the flagstick and through a hazard like a bunker. You can also use this shot just off the green when you're short-sided, and you want your ball to stop abruptly.

A sandbagger is a negative nickname for golfers who cheat while playing by pretending to play worse than they really are before switching and playing to their full potential in the end. It's a trick golfers use to lull their opponents into a false sense of security. If you win a bet or tournament in this fashion, you're guilty of sandbagging.

If a golfer has the yips, they most likely have a problem that prevents them from making short puts. It's a nervous affliction, also known as the staggers, twitches, jerks, and jitters. These yips cause them to jerk the putter, and they can't create a smooth stroke.

A handicap is a way to measure a golfer's potential in numbers. The handicap measures how many strokes over par you'll take to complete an 18-hole round of golf. It helps level out the playing field and allows golfers of different skill sets to play against one another. Better players have lower handicaps than new or average players.

A par is a scoring system. It's the predetermined number of strokes that one scratch golfer would have to take to complete the hole. If you add all of the pars of each hole, you'll get the round total, and a tournament is how many pars each round takes to complete.

A birdie is a basic scoring term. So, if you complete the hole with one stroke under the par count set by the scratch golfer, you'll birdie the hole.

On the other hand, you have a bogie. This is another basic scoring term you'll hear. If you bogie a hole, you complete the hole with one stroke more than a scratch golfer would use to finish it.

Four-ball is a playing format where competitors pair together and play as a team. Each golfer gets their own ball. You score each hole using whichever player's score was lower.

Hey! I`m Kadir Tuncel. I finished University of Sakarya with a specialization in International Relation. Now I live in Istanbul and practice skills received there. Also, I`m interested in traveling. My dream is to get 8 hours of sleep every day.

Throughout the beautiful state of Colorado, individual and families look for golf homes in Colorado as well as golf club memberships...

What are the Best Golf Simulators For 2020 With over 10 years experience in the golf simulator industry, Spectrum Golf breaks down the best...

How Accurate Golf Simulators Are Golf is a game that needs a lot of practice to do the best. If you want to show your best in the course...