How to prepare your children for their first communion? 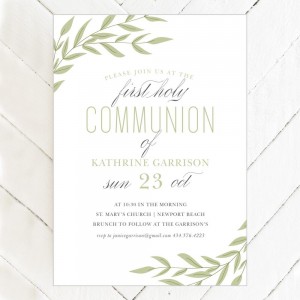 First Holy Communion is a religious ceremony that a catholic child goes through at the ages of seven and thirteen. This is the event on which the child accepts the Eucharist (bread and wine) for the first time in the church in the presence of his close ones who act as witnesses. This marks his start of a deep connection with the Catholic Church.

So, as parents you need to have certain information about a first communion before taking your child through one. The first communions generally take place on the Sunday after Easter as it has a close connection with the Eucharist. However, with permission and can be done anytime at the local parish. The Holy Communion takes place in front of the people who are closely associated to your child, so make your list of invitees ready in order to send first communion invitations. Remember to maintain a proper and modest dress code for the ceremony and your child should also dress up soberly and still stand out of the crowd, as it is his special day.

There are certain lessons your child should endure before he walks up to take his First Communion.

With all of this done your child will be better prepared for the time they get for their catholic confirmation when then become a young teenager.

Romy Fernandis
What You Must Know About Reminders Child Communion

Do you have a child and think that he or she has reached the age of participating in communion? Are you thinking when is the right time for...

A good child's first Communion is an extremely significant milestone in the child's religious life. It really is a tradition to offer gifts...