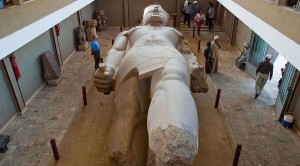 The Survey of Memphis, Capital of ancient Egypt

The Egypt Exploration Society has been conducting an archaeological survey of the site of Memphis and its surrounding area since 1981. A summary of the aims and achievements of the project appeared in Archaeology International 1999/2000. In the present article the field director reports on the progress made since then and considers some of the contextual aspects of this survey of the ancient Egyptian capital.

A settlements from erosion. Ancient Memphis, located south of Cairo, was capital of Egypt through much of the Pharaonic period. It has been the subject of survey by the Egypt Exploration Society since 1981, a report on its work appeared in Archaeology International 1999/2000.

Ten years on, we can report on the progress made since then and consider some of the contextual aspects of this survey of the ancient Egyptian capital. Memphis was built in a crucial location at or near the head of the Nile delta, 20km south of the centre of modern Cairo.

It not only commanded the river approaches from the valley to the delta and the Mediterranean, but also formed the hub of numerous cross-desert routes from the Saharan oases to the Red Sea. It is located in an unusually narrow section of the Valley, which certainly enhanced its ability to control traffic and withstand invasion the river close to the contemporary elite necropoleis of Saqqara, Zawiyet Aryan, Giza and Abu Rawash; it has subsequently migrated, perhaps erratically, over the past five thousand years to the eastern side of the floodplain, and today flows close to the older rock and gravel strata of the eastern (Arabian) desert.

The dynamics behind this long-term shift are still not perfectly understood: there are probably multiple causes, such as aeolian sand deposition in the west from the Old Kingdom (2500 BC) onwards, and the formation of alluvial sand and silt islands as part of the natural Nile regime, perhaps enhanced and augmented by human activity such as the construction of moles and earthworks to protect existing settlements from erosion.

Locating Memphis One of the great unknowns at Memphis is where the settlement was at the time that the pyramids were being built, these monster funerary structures are of course world famous, but nothing is physically known of the city that they reflect, apart from new and ephemeral towns built near each of the pyramids to house the workforce and its administrators; the best known of these is the "lost city of the pyramids", located to the southeast of the Giza pyramid group, and currently being explored by Mark Lehner and his team.

The core settlement of Memphis is however truly lost: so far, no in situ structures of any date earlier than the Middle Kingdom (2040–1640 BC) have ever been found in the floodplain. This is no doubt due largely due to the rise in the floodplain caused by the annual Nile flood and its deposition of silt (estimated conservatively at on average a metre per 1000 years), partly also by the changing course of the river and the need for the city to follow its movements.

Ever since the publication of the Description de l’Egypte, the colossal scholarly report on Egypt past and present that resulted from the military and cultural invasion of Egypt by Napoleon Bonaparte at the end of the eighteenth century, the received wisdom has been that Memphis was located around the modern town of Mit Rahina, in the middle of the floodplain between Saqqara and the Nile.

We have been led to question whether there need have been a single, nucleated site in the early stages: in view of the narrow strip of land available to the west of the river, and the attenuated nature of the clusters of pyramids, we have proposed that the location of the city might have been relatively fluid before harbours receiving river traffic, at least during the inundation, but it is difficult to see how this would work in this case.

It is perhaps more likely that the temples were approached over dry land from a real riverside mooring further east. We were intending to make more progress in this area, but in the last few years our programme has been obstructed by the decision of the Supreme Council of Antiquities (SCA) to build extensively at the foot of the escarpment, with very little opportunity for us to react in time: our main excavation site now lies beneath an access road connecting the tourist entrance to the necropolis with a security and administrative complex to the north.

A concrete exclusion wall has been built along the edge of the escarpment, effectively creating an archaeological ghetto of the funerary monuments on the Saqqara plateau, so that the little known and under-explored zone below is now inaccessible. We are therefore forced to turn to other aspects of the site and the region, to carry forward some of the ideas that we have formulated.

Excavations To investigate the preliminary findings from local sediment cores, we carried out two pilot excavations at the foot of the escarpment. The first of these showed an unexpected level of activity within the sequence of sand layers that covered the older floodplain, during the Ptolemaic and Roman periods; a nearby core strongly suggests that early dynastic occupation could be expected here at lower depths.

The second site, a more ambitious exposure very close to the escarpment, lay across the line of the north enclosure wall of the Ptolemaic-RomanAnoubieion (temple of Anubis), which provided a useful fixed point, a datable structure with which to associate earlier levels. Good progress was made with this excavation, but dewatering equipment would be needed to allow us to penetrate the deeper deposits which we believe contain the very early occupation.

We have already the Nile River moved east and older riverbank settlements found themselves marooned. One of the best-known traditions surrounding early Memphis (found in the writings of Herodotus, who visited Memphis in the fifth century BC) is that the city was founded by a king called Menes, who diverted the river to create dry land on which to build.

While the hydrological technology of the Egyptians at this time was probably not up to this kind of manipulation, there may be a kernel of historicity in the account if we suppose a combination of natural processes and human intervention.

Certainly in Herodotus’s day when Egypt was under Persian domination, and later into the Ptolemaic period, the city was protected by extensive and carefully maintained river defences, and his version of events may well be a projection back in time of existing conditions. Computer modelling by Judith Bunbury’s team of Nile movement over the past five millennia, based on the river’s recorded behaviour in the last three hundred years, has now raised many interesting possibilities. There is a high probability that the delta head, the point where the river begins to split into a distributary formation, was located much further south (upstream) in the past.

Today the delta head is in the region of Awsim, some fifteen kilometres northwest of central Cairo; the projections suggest that in the Early Dynastic/Old Kingdom period the river began to split near Memphis, nineteen kilometres south of Cairo, and that the delta head has gradually migrated north since then. This has important consequences for the location of the pyramids: the famous Step pyramid of Djoser (Third Dynasty, c.2620 BC), built at Saqqara at a time when Upper and Lower Egypt (the Nile Valley and Delta) were really being forged into a single political entity, was perhaps positioned to provide views not only over the expanse of the Delta floodplain (which it still does), but also over the ideologically important point at which the river began to part.

Similarly, an important temple dedicated to the Nile (and the notional "origin" of the Delta waters) was located in later times on the east bank just to the north of Memphis. Important evidence from beneath the streets of modern Cairo is also providing a fuller picture of how the Nile was behaving in the Roman period, especially at the Trajanic fortress of Babylon.

A more detailed environmental context for the ancient course of the Nile over time has also helped us to explore some of the phenomenological aspects of Memphite topography: we have for example questioned whether the available intervisibilities between Memphis and Heliopolis (once the centre of the solar cult of Re, and now part of an industrial suburb in north-eastern Cairo) might have determined the locations of some of the pyramids and (in the Fifth Dynasty) their accompanying sun temples.

Similarly, we have raised the possibility that changes in pyramid size (for a long time a topic of some contention) was due not so much to the declining fortunes of the rulers of Egypt, but to where they were intended to be seen from: the largest and earliest pyramids (Giza, Dahshur) are also those furthest from the Memphite "core", and the pyramids decrease in size the closer they get to this core. The earliest name for the city, "White Walls" (Inbu-hedj) – technically the toponym "Memphis" (Mennefer) only refers to the late Old Kingdom site – is usually explained in reference to an Early Dynastic structure, presumably a palace, but our reconstruction of the Early Dynastic landscape suggests that the pristine limestone cliff profile might have suggested the name.

Some mainstays of Egyptian literature might also be reconsidered in the light of these new ideas about the local landscape: the well-known story of Sinuhe, for instance, who blunders about the countryside near Memphis in something of a panic, following the death of the king and a political coup; or the seige of Memphis by King Piankhi (or Piye) of Nubia who attacks the city by river.

All the majestic cities in Egypt like Cairo, Alexandria, Luxor & Aswan and the best way to explore such mythical heritage is boarding a Nile Cruise through our Egypt travel packages.

Egypt has elevated the process of cultural transformation to whole new levels. The majestic cities of Cairo, Alexandria, Luxor, and Aswan offers the once in a lifetime chance to witness true wonder and magic in their fullest light

Memphis EgyptThe Survey of Memphis, Capital of ancient EgyptThe Egypt Exploration Society has been conducting an archaeological survey of...

EGYPT "LAND OF PHARAOHS" OVERVIEW ABOUT EGYPT HISTORY Egypt is without a doubt of the greatest civilization ever created. The history of...