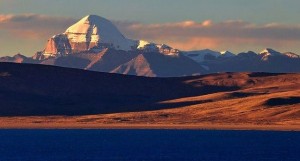 The pious Mt Kailash is the central attraction of western Tibet. The mountain is revered in four major religions of Asia namely; Hindus, Buddhists, Jain and Bon. The remote, isolated part of the Himalayas surrounded by harsh alpine desert of Tibet, kept Kaialash Manasarover region untouched until the date. Only determined ascetics could reach the mystic land until the Austrian explorer Mr Heinrich Harrer, the writer of the book ‘Seven Years in Tibet’. Harrer must have been the first westerner to visit Mt Kailash. Harrer reached Lhasa in 1946 having crossed western Tibet (passing Holy Mt Kailash). But Tibet was formally open for tourists only in mid 1980es.

Beside being highly sacred, a journey to Mt Kailash is an inexhaustible opportunity to explore nature, culture and history of Tibet. Four routes have been popular among tourists to Mt Kailash. While pilgrimage follows the shortest and more comfortable route through the habitations, adventurers and explorers follow more off the beaten path routes.

Being the most revered mountain in Hindu and Buddhist empire, pilgrims have been travelling to Mt Kailash since prehistoric times. However the remoteness, harsh climatic conditions and barren high ground limited the pilgrimage to few ascetics only. With the development of basic infrastructures, numbers of pilgrims have significantly increased. About 6 hundred thousand tourists visit Mt Kailash each year.

All inclusive Kailash Manasarover pilgrimage tour costs about USD 1,800. The fee may vary with nationality, group size and other facilities.

The Lhasa to Kailash Tour via southern route includes the best of Tibetan nature and culture. The route of about 1,000 km extends parallel with the Himalayas on Tibet side coming across several view points. The journey starts from Lhasa, the capital of Tibet and visits the cultural and historical monuments of central Tibet before heading to the remote wild western Tibet. Visit the famous Potala Palace, Jhokang temple, Sera monastery and Drepuk monastery around Lhasa. The murals, crafts and idols of these iconic buildings have lot to tell about Tibet’s history and Buddhism. Gyantse and Shigatse en-route were the other historical cities of medieval Tibet. The southern route from Lhasa to Kailash is also a Himalayan sightseeing opportunity. Snow peaks loom at a distance throughout the route and the view includes Mt Everest and Shishapangma (8012m / 14th highest). One can take an extra day detour to Everest north base camp. There are also some of the biggest lakes of Tibet along the way. Yamdrok Tsho with area of 638 sq km is the 6th biggest lake in Tibet. The pastures fetched by salt lakes and the Himalayan glaciers are also sanctuary for many wild animals.

The Kailash tour from Lhasa via southern route is about 15 day trip starting from Lhasa and costs about USD 2,500.

The northern route is longer and less popular but is highly rewarding for those looking to experience unspoiled Tibet. Traveled by very few foreigners, the northern Tibet exhibits rural Tibet forgotten by time. The infrastructures may be basic but the journey is rewarding with sensation of adventure, scenery and cultural encounters.

The route heads north of Lhasa to Namtso Lake. With the area of 1,920sq km, Namtso is the biggest lake in Tibet. Huge part of the road ahead is only graveled with sections of dirt roads passing through the stunning view of mountains and lakes. The sparsely populated meadows in natural settings just have tracks of the other vehicles to follow. The route cruise through the vast Changtang Grasslands offering an opportunity to see folks of wild yaks, Tibetan antelope, wild Kiang (wild donkey), blue sheep and more. Changtang is also home of nomadic Changpa people. The route finally enters the valleys of the upper Sutlej River with ruins of ancient cities as part of Guge kingdom. A number of temples are still intact and contain exquisite murals and decorative motifs, some dating back more than 1,000 years. We can join the main road from Saga (southern route) and then visit Lake Manasarovar and Mt Kailash.

Simikot in the western Nepal is popular for short and direct access to Mt Kailash. Simikot is the district administration of Humla district in the far west of Nepal. The district in the north shares border with Ngari region in western Tibet where Mt Kaialsh is located. From the border town Hilsa, Mt Kailash is only about 102 km. The district capital Simikot is connected with Kathmandu by flight. It is very common among pilgrims to charter helicopter from Simikot to Hilsa and then drive to Mt Kailash. However for adventure lovers this route is an opportunity to trek into remote western Nepal before driving to Mt Kailash. The most stunning trekking region along the route is through ‘Limi valley’. The people of Limi valley have been traders along the trans-Himalayan salt trading route. Hidden in mountain citadel, the valley still practices century old Buddhist lifestyle in blend with Shamanism.

Tour package for Kailash by helicopter costs about USD 3,200 /- and takes 12 days from Kathmandu and back. Pilgrims fly from Kathmandu to Simikot by fixed wing flight and then on charter helicopter to the Tibet border. From Taklakot (border town) drive about 102 km to Mt Kailash and trek around Mt Kailash. The return journey will be done in the same manner as earlier.

Question: 1 How is a SIP trunk in Cisco Unified Communications Manager configured for SIP precondition? A. The configuration is done by...

At Girls ‘Round Here, we just can’t deny that summer in the south is the best. Those long sunny days are so beautiful and there are just so...