The Origin of Tattoos – A Brief History 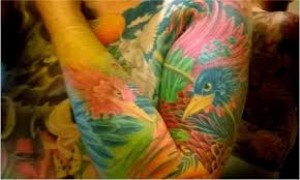 Most of the general population is familiar with the term ‘tattoo’, but did you know the earliest evidence of tattoos dates back to 5000BC? Tattoos have continued to evolve throughout history and across cultures, and this post explores this incredible evolution.

The tattoo industry is full of different styles, and trends continue to keep evolving. Let’s have a look at some prominent tattoo styles that are increasingly popular for people to get inked.

The phenomenon of tattooing has been recorded in texts across history. In 1871, Charles Darwin wrote ‘The Descent of Man’, where he stated there was barely any country in the world that did not have some involvement in tattoo practices.

In the 19th century, Karl Von Den Steinen, a German explorer and ethnologist said, the concept of tattooing was derived from the ritual of decorating the body with scars. Plant sap was rubbed on the wounds to prevent excessive bleeding, which discoloured the scars, with the healed scars taking the form of tattoos.

In ‘Missionary Travels and Research in South Africa’, the physician and author David Livingstone stated that many Africans inserted a black substance under their skin to create a raised scar.

From these shreds of evidence, it can be deduced that tattooing did not originate from a single tribe as it was a key practice used across the globe by different cultures and religions for a variety of reasons including primal or religious rituals, and therapeutic implementations.

Ancient tattoos didn’t look like versions we see today, as they were steeped in the culture of the time. The oldest tattoo sample was collected from a Japanese tomb, which has been dated back to 5000BC.

Some scientific studies have found tattoos are one of the most exceptional pieces of evidence relating to ancient acupunctural practices as tattoos were positioned around different acupunctural zones of the human body to treat various symptoms.

Many prominent cultures in history have had a love of tattoos, as can be seen from the Egyptians, as well as in ancient Roman and Greek cultures. It is also said that the Greeks learned the practice of body art from the Persians when they mark slaves and prisoners with tattoos to prevent the chance of escape.

Curious about the origin of tattoos? Check out this post and quench your thirst for knowledge!

As the ancient superpowers conquered civilisations across the globe, the natural migration of these populations, including the gypsies from the Middle-East and India, meant tattoos were introduced to new audiences. For example, the influence and popularity of oriental tattoo designs is now attributed to the far west migration of some of these cultures.

Tattooing is not a new practice; it carries an enriched history with it. Don’t stop yourself from getting a tattoo because of a preconceived notion about it only being a modern-day practice. Tattooing is the best way to express your inner-most thoughts! Reach out to the best tattoo parlour in Bali and get inked!

Tattooed girls- With variety of tattoos in their body

In today’s world tattoo has profited a huge attractiveness and persons of all age assembly visit the tattoo creative persons who does tattoo...

Jacob Panse
What to Do if You Regret Your Tattoo

People tend to regret the presence of tattoos after they live with them for many years. Regrets occur for business and personal reasons...

Carmen Miron
What are the disadvantages of having a tattoo in the modern world?

Tattoos have become a significant part of the youth culture in the recent times. There is a lot of change in the culture and tattoos are one...