DTH, Broadband and Mobile Services in One Bill in the new Airtel Home Plan 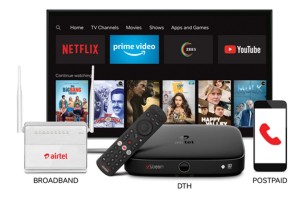 Airtel is known for its pocket-friendly plans, be it value filled post-paid plans or the attractive Airtel DTH recharge offer. Airtel also provides best flexibility for opting for different plans and making the payments in the easiest way. Lately, the telecommunication giant has come up with its Airtel Home Plan, in which customers will get one consolidated bill for services like DTH, broadband and post-paid connection. So far, the plan is active in five cities in India, Panchkula, Chandigarh, Mohali, Kharar and Zirakpur. It is likely to be launched in other cities very soon.

Let’s shed some light on the three existing plans of Airtel being offered:

The Airtel Home plan has been created with the aim to make the entire process easier for the customers and to minimize the time spent in managing and paying bills of multiple Airtel accounts. They would also get the break-up of the entire bill through an itemized as well as summarized form. Customers don’t have to spare time for their DTH recharge or postpaid phone bill payment separately anymore and can do it in just few clicks regardless of where they are at the time.

I’m here to make a life out of what I love, and what I love is blogging.I truly believe that passion is relayed back to my readers through the innovative and exciting content that I post.

Pree Sharma
Where can I buy the DTH new connection online

DTH connections are replacing traditional cables and it is high time to shift from the old-school cable connection methodology and take your...