How Enrique Enn Emerged As A Successful Graffiti Artist 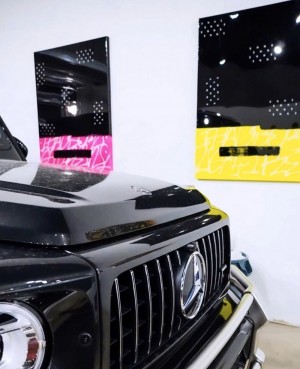 Enrique Enn is a professional street artist; a graffiti designer to be precise. Originally he is from Venezuela, and later moved to the United States with his sister. During his stay at Venezuela, where he had spent 18 years of his life, he mastered the skills of graffiti art, and used to roam around from one corner of the city to another; leaving the mark of his creativity. It was in the year 2014; he, along with his sister, moved to Miami in the United States.

It needs to be mentioned, that graffiti on walls is considered to be illegal in Venezuela. However, his passion towards the art got the better of him; and he continued trying his skills. It requires to be considered in this interest that though, he learned the talents of editing the videos, graphic designing and several different art kinds, he proceeded with graffiti designing. He was immensely talented, and within a very short period of time, he had mastered the skills of graffiti, and emerged as professional graffiti designer.

He Succeeded Despite Of All The Odds

After he had moved to the United States, during his early days, Enrique had to do different kinds of things foe surviving in a city, where he had no friends or family. However, under the most adverse of conditions and against all the odds, he managed to pursue his passion towards art and creativity. It is perseverance, which got him in contact with some of the most renowned artists, whom he had the opportunity to work for. He stayed confident on himself and knew as long as he works hard and does the use of the chance awarded to him; he is going to succeed. Today, Enrique is a professional graffiti artist, an illustrator, a graphic designer. He is regarded to be as one of the most successful and multi-talented individual, who has excelled in his domain within a very short span of time.

Unless you know what Graffiti is, you won’t be able to appreciate the efforts and achievements of Enrique. Graffiti is an art form, where the wall of the streets is painted with different kinds of designs and textures. Special colors are available for graffiti work. These colors are available in the form of spray and can be easily spread across a surface. However, the most difficult part is to create something unique and artistic out of it.

Enrique, with his special talent and hard work, managed to master the skills of graffiti designing very quickly. At a very young age, his work drew the attention of people and he got the appreciation he deserved. This motivated him to push even hard, and despite of all the difficulties and odds; he had managed to establish himself as a successful artist, with expertise in different fields. Enrique Enn is an inspiration for those, who wish to pursue their career as an artist, specially, when it comes to something non-conventional.

He had shown that with hard work and determination, you can reach the pinnacle of success. Please visit his Instagram page https://www.instagram.com/Enn/ to know more about him.

Victoria Popescu
The first sign in this summer with Barcelona has been decided, 12 million repo Deulofeu as new

The Barcelona youth player Deulofeu at the beginning of his debut was praised as "white Ronaldinho", now the Spanish striker played in...