A complete guide to Annapurna Base Camp Trek 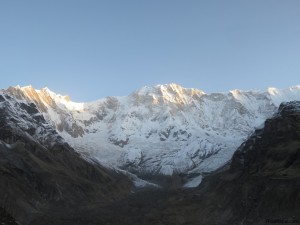 The trek to Annapurna base camp is the most popular trek in Nepal. Well established lodges and the spectacular views of the Himalayas with couple of 8,000 m peaks make the trek popular among the global trekkers.

Here are highlights of the Annapurna base camp trek.

How difficult is the trek?

Annapurna base camp trek is moderately difficult trek which is suitable for reasonably fit trekkers. However it is the easiest trek compared to other base camp treks. Since the trek starts from the subtropical foothills, it climbs up and down a lot at the beginning. At the higher elevation, it follows the deep, narrow valley where the climbing gets relatively gradual but the altitude makes it difficult. Depending upon the season, room temperature could go down to – 10 degree centigrade and the avalanches and snow makes it more challenging.

Best season for the trek

Spring and Autumn are the best time to do the trek. The rhododendron blossoms from mid March to mid April make the trek extraordinarily beautiful. Similarly, the post monsoon clear sky and comfortable temperature make October and November the busiest season. It is also sensible to avoid the crowd of peak time. The good weather continues throughout mid November till mid December. The snow may close down the trail during the peak winter. Similarly it is often cloudy and rains a lot to trek during the summer.

You can simply fly to Nepal and acquire visa on arrival at the Kathmandu airport. Two different types of permits are required to trek to Annapurna base camp. Trekking agencies can arrange the permit before trekkers arrive to Kathmandu to save time. It is also possible for individual trekkers to make permit. The Annapurna conservation Area Project (ACAP) permit costs USD 30 and the Trekking Information Management System (TIMS) costs USD 20.

There are well established teahouses along the trail to Annapurna base camp. Teahouses are run by local families. Since it has been over 30 years, teahouses are now more comfortable with attached western toilets and hot showers in most of the places. Rooms are basic at higher reaches though. They cater simple international cuisines with basic standard of hygiene and taste. The most common breakfasts are pancake, cereals, eggs and Tibetan bread with tea and coffee. Fried rice, noodles, pastas, roasti, momo, veg and non veg curries with rice and the traditional Nepalese food – Dal Bhat are common lunch and dinner.

For water, one needs to carry reusable water bottle. Boiled and purified drinking water is available at lodges for refill at small charge. The conservation area has banned importing plastic bottled water.

TIPS for Annapurna base camp trekking

What to Know about Annapurna Base Camp Trekking?

In the central-North, there lies 55 km long and compact array of mountains commonly known as Annapurna massif. The massif falls under the...

Dawa Pun
Why to travel to Annapurna region for trekking?

Why to travel to Annapurna region for trekking? Annapurna is the Massif Mountain in north central Nepal. Annapurna peak include one and only...