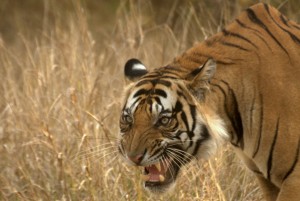 et in pristine surroundings of Vindhya an extensive range in Central India the little paradise in popular all over the World. It is wild and beautiful beyond imagination and mysterious jungle where the spirit of the tribal still roam wild. In the confines of the fort there are said to be invaluable treasures hidden n perhaps in the depth of the lands and forests but nobody knows where.

The only treasures found are the zoomorphic idols of Lord Vishnu massive and imposing some on the mountain top while others lying down like the reclining Vishnu of Sesh Shaiyya. These are the breeding grounds of tigers and other wild animals. The tortured terrain full of steep cliffs and forest lined table top mountains and the meandering rivers create a panoramic landscape that invites photographers and film makers alike. Though the fort in ruins is out of bounds for tourists one can still visit the reclining Vishnu and on festivals the fort complex as well.

Bandhavgarh is unique where history and diversity prevails entwined in remote confines of Central India or Madhya Pradesh. This is tiger land with highest density of big cats and hence offers best sightings. Declared as tiger reserve and a National Park the big cats and the biodiversity is well protected. The area of the jungle extends to more than 1100 sq.km and is managed by the field director of conservator based in Umaria. The reserve is based in Umaria district of Madhya Pradesh.

A well guarded protection management and fire control system prevails in the reserve. This ensures that the ecosystem is not marred by poaching and uncontrolled fire. In last two decades the forests have been rejuvenated and the populations of animals have recovered. On wildlife safari one can see the tiger, leopard, sloth bear, bison, wild dog, boar, jackal and number of langur monkey.

Small nocturnal animals like jackal, porcupine, civets and nightjar birds can be seen on night safari in the buffer one. Night excursions are not allowed in the core zone or critical tiger habitat. There are more than two hundred fifty varieties of avian species in the park which attracts number of birders from all over the World.

Safaris are organized in the day as well. For the visitors safari booking can be done online at MPOnline Website. Booking can also be done at the entrance gate subject to availability. There is a limit to entry so one should book well in advance.

Best chance of seeing the big cats is both in the evening and morning but for photographers light availability is greater in the day time. Also time in the park is five hours in the morning and only three hours or less in the evening.

There are number of resorts or hotels in the buffer area. The reputed once are the high end hotels in Bandhavgarh National Park for a good stay. For best animal and bird watching experience one needs a naturalist service which is usually provided by the hotels. The park is home to number of snakes which are nocturnal. It is called Sal forests because of prevalence of Sal trees there are mixed species of trees and bamboo as well. A innumerable of herbs and shrubs occupy the niche ecosystems and the destination is dotted with marshy grasslands where big cats prefer to hunt. This makes the park popular with tourists who arrive here every year. The park is closed during the monsoons from 1 July to 30 September.

Dotted with some of the most stunning tourist destinations, India is a paradise for the globetrotters. The country is visited by many nature...

Bali is rich in wildlife and the adventurous wildlife conservation program in Bali gives the best efforts to bring safety and security to...

Nuisance wildlife is a massive problem. Animals are extremely destructive and can spread diseases and create stains and foul odor. If your...