The Legend of the barefoot marathoner, Abebe Bikila 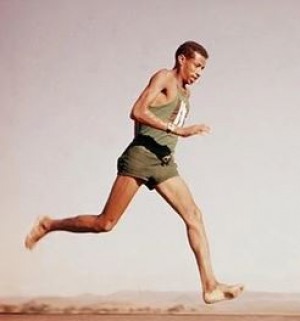 The marathon is the stuff of legends and is a really a hard distance to run, even for those who are trained. The marathon covers 42 kms and is hard on the body, particularly the feet which is why all marathon runners tend to spend so much time on and give so much consideration to exactly what it is that they wear on their feet. Marathon runners do spend considerable time getting the appropriate running shoes and a lot of money is involved in running shoes with it being a big industry. Back at the 1960 Rome Olympic Games, Abebe Bikala from Ethiopia was a last minute addition to the team, so that when he turned up to be fitted with the team gear there were no running shoes remaining in the teams supplies which would fit him. Rather than wear the wrong size he decided to run the marathon barefoot and then went on to win the gold medal. This is the stuff that legends are made from.

His achievement in doing this often acclaimed as something tremendous and well worthy of legend status. Recently there was a fad with a significant group of runners advocating that running shoes are not that important and they are not all they are be claimed to be. They were advocating barefoot running much like nature intended as that is the way that we evolved. Historically humans had to run large distances to survive as animals needed to be hunted on foot over long distances and this was done without using running shoes. The running shoes are really only a relatively recent invention.

Those who advocate the barefoot approach to running point to the achievements of Abebe Bikala as even more evidence that we do not really need running shoes for running and that barefoot is best. Abebe Bikala winning gold medal at the Rome Olympics without running shoes certainly suggest that it is possible to do it. However, he later went on to win the gold medal and break the world record in the marathon at the 1964 Tokyo Olympic games. This time he was using proper running shoes. This suggests that he had the ability to run faster when he was wearing running shoes. The achievements of Bikala were legendary but making use of them as proof that it is better to not use running shoes and run barefoot does not stack up to scrutiny.

Abebe Bikala was born August 7, 1932. His achievement in winning the Rome Olympic marathon was the first gold medal won by an athlete from Africa. On March 22, 1969, he was paralysed following a car accident and never walked again, passing away October 25, 1973 at the age of 41 from complications. There is a stadium in Addis Ababa, Ethiopia that was named after him. There have been a number of biographies and films about him and documenting his athletic career and the legendary achievements against multiple odds. Most publications about the marathon and the Olympics feature stories about him.

Nike company offers released the actual Free idea in 2005 as a means of incorporating this ideas and benefits of barefoot running to bolster...

Barefoot running was a big fad about 10 years ago that lasted a few years and attracted a lot of interest, especially in social media. In...