The Modern Day Treatment of Gout 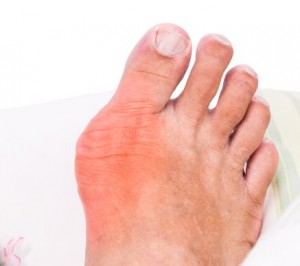 Gout is one of those historical conditions as there are many mentions of it in past literature, at least since medieval times. The historical stereotype of it is that it is associated with the upper classes who overindulge in alcohol and certain foods. That image was portrayed in early artwork depicting those that had gout. Gout is no longer considered a condition of overindulgence, due to the recent research showing a significant genetic component to it.

Gout is a painful inflammatory condition that mainly affects the joints, most commonly the big toe joint in the foot. It is due to uric acid crystals being deposited in joints when the blood uric acid levels are high. The uric acid comes from the breakdown of purines that come from the eating of foods such as venison, trout, tuna, haddock, sardines, anchovies, mussels, herring and alcohol. It is easy to see how that historical stereotype was constructed based on the overindulgence of the upper classes in those types of food and alcohol. The real issue is not necessarily the amount of those foods that are consumed, but the genetics of the biochemical pathway that breaks the purines in those foods down into the uric acid and how the body deals with it.

While diet is still important in the management of gout and reducing the amount of food that have the purines in them is still considered important, but it has become clear in recent years that this is not enough on its own and almost all those who have gout will probably need drug management. It goes without saying that drugs are going to be needed for pain relief during an acute attack. The acute phase of gout is extremely painful. Over the long term there are two types of drugs that can be used for gout. One type of drug block chemicals in the pathway that breaks the purines down into uric acid, which simply means there will be less uric acid in the bloodstream that can find its way into the joints to trigger an acute attack of gout or lead to the chronic gout. The other main type of drug is one that helps the kidneys excrete more uric acid. This will also lower the uric acid in the blood. Typically, only one of these drugs is all that is needed, but occasionally both are needed to be used at the same time. As these drugs are usually pretty effective, that does not mean that the lifestyle and diet changes can be ignored. Local measures, such as wearing good fitting footwear if the big toe joint becomes too painful is important. Even ice packs during an acute attack can also help with the pain relief.

All of these issues on gout were discussed in detail in a recent episode of the podiatry livestream, PodChatLive. In this episode the hosts chatted with the podiatrist, academic and researcher, Keith Rome who has substantial experience in gout having many publications on the topic. Podiatrists play an important role in helping manage gout.

Today, there have been more and more people living in this world who become aware of how important it is to ensure their security. To tell...

In this present modern living world, there is undoubtedly a requirement for the modern home furniture, the use of modern furniture has...

Valentine’s day gifts Get your mind ready for a romantic evening. Shop our unique collection of Personalised gifts for valentine’s day to...