5 places to visit around Lumbini 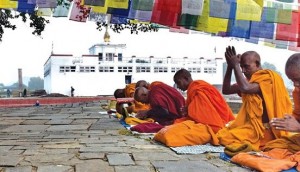 Lumbini is the birthplace of Buddha and Nepal is the place where Buddhist philosophy was kept alive until the date. While Shakya muni Buddha spent most of his life preaching in present day India, Nepal was the birth place of three Buddha and the popular place to go on a retreat. Buddhist masters like Nagarjuna, Padmashambhawa, Milarepa, Naropa, Tilopa and others spent time in the mountains of Nepal meditating and preaching.

There are about 62 archaeological sites around Lumbini with 6 must to visit in your trip to Lumbini. However in lack of publicity, these power places are visited only by dedicated devotees. Here are five things to do or places one must visit during the Lumbini Tour

The sacred Garden is where the exact birth place of Buddha is located with the Puskarini pond in which Buddha and his mother Mayadevi took bath right after the birth. Lumbini existed as a beautiful garden between two kingdoms during the Buddha’s time. Queen Mayadevi went into labor at Lumbini garden while travelling to her parental home at Devadaha and gave birth to Gautama Buddha.

The Lumbini garden has been recreated with the master plan in the area of 1 sq miles. The garden surrounds the Mayadevi temple which enshrines the marker stone pin pointing the exact birthplace of Buddha and the early temple ruins around it. There are also ruins of early stupas and a monastery complex spread in the garden. Best time to visit the sacred garden is in the evening when monks chant and offer oil lamps.

Lumbini has been developed under a master plan in the area of 1X3 squire miles. The master plan encompasses three sections visualizing it as a Buddhist pilgrimage. The pilgrimage starts from the southern end of the plan known as New Lumbini village representing the mundane world. The pilgrims then enter the monastic zone separated into Teravada and Mahayana group of monasteries by a canon. Visit of monasteries is supposed to implant wisdom and purify the mind and body to finally enter the birthplace of Buddha in the sacred garden as the symbol of enlightenment.

One can walk, rent bicycle or ride Rickshaw to do this pilgrimage. Walking and renting bicycle will give you flexibility with time you spent along the pilgrimage.

Archaeological excavations have discovered the palace where Buddha spent 29 years as prince Siddhartha and the ‘Mahabhiniskramana Dwara’ from where he embarked on the journey of enlightenment. The archaeological site with 12 ft wide fortification wall surrounded by a moat, running around the area of 500 X 450 m with building complex has been identified as the Tilaurakot palace. Several excavations at Tilaurakot site have revealed various antiquities within thirteen layers of human depositions dating from 8-9th century BC to 2-3 century AD.

Nigrodharma monastery ruin at Kudan village is one of the must to visit place during your Lumbini visit. The monastery was first built to house Buddha and his 300 disciples for the home coming after his enlightenment. As Buddha he refused to stay in the palace. The monastery is named after the monk Nigrodha who made emperor Ashoka, a monk. This is where Buddha’s son Rahula was ordained as monk. Mah?paj?pati Gotam? first asked permission for women to enter the Order at the same place. Buddha visited the monastery in several occasions and preached about 5 different suttas including Majjhimanikaya Sutta, Cula Dukkhakkhandha Sutta, Bhaddekaratta Sutta.

Ramgram Stupa is the only intact Buddha relic Stupa out of the first eight built after Buddha was cremated. While other relic Stupas were later excavated and redistributed by Emperor Ashoka, Nagas (serpent gods) stopped him from doing so at the site. Structure of 7 m high Stupa was found under a mound which is waiting for further research.

In the recent geophysics survey carried out at the Stupa area, remnants of the ancient pond and a monastery have been traced. Ramgram Stupa have been enlisted as tentative UNESCO World Heritage Site.

iTourNepal has been organizing Lumbini Buddhist circuit tour for over a decade. Visit our website Nepal Tour if you want to know more about Lumbini tour with visit of other popular places in Nepal. This is one of the sustainable tour which supports our local tour guide and the less visited Terai villages.

If you are planning to visit Lumbini, the birthplace of Buddha, don't just do a day tour but also visit these important Buddhist sites. These sites are still awaiting further research and excavation. But once accomplished these will together make Lumbini Buddhist circuit tour the most popular Buddhist pilgrimage. Even though the Lumbini Buddhist circuit tour just takes about 3 days from Kathmandu to Kathmandu, this is the best tour to understand Buddha and Buddhism. Don't forget to write in the comment about which place you think is the best to visit around Lumbini. Or also add your idea to make the Lumbini tour better.

Montgomery is the capital of Alabama which lies on the East bank of the Alabama River and is full of amazing sites where visitors can go...

DLF is a renowned name in the real estate industry that did not need any introduction. With nearly 70 years of track record of sustained...

Dubai is one of the destinations that offer entertainment for the entire family. There are beaches where you can relax, water parks...