What is a clubfoot? 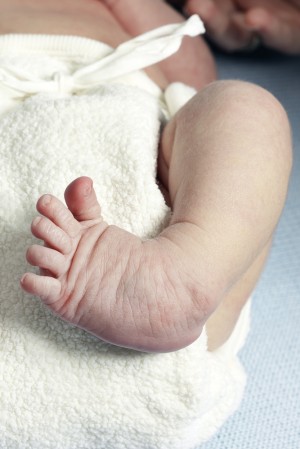 Clubfoot is a deformity of the foot that is usually recognized at birth. The term clubfoot refers to a variety of different types of foot deformity, with the most common being what is called a talipes equino varus. In this deformity the foot is pointing downward and inwards. A clubfoot can affect just one or both feet. It occurs about 1-2 in 1000 live births making it a relatively common problem at birth. The medical and nursing staff typically have a check list of things that they look for or check for at birth and clubfoot is one of those. The problem can just be an isolated deformity of just one or both feet or it could be part of a genetic disorder or syndrome that is associated with a number of other problems. It can also be of a flexible type or rigid type, depending on how mobile the foot is. A flexible type is much more amenable to treatment.

The cause of clubfoot is not totally clear. There is a genetic component as it can be part of a genetic syndrome. The most common type of clubfoot does resemble the position of the foot in very early development, so there is something that appears to stop the normal development of the correct foot position from developing. That could be a genetic issue, or some environmental issue or it could be due to pressure on the foot due to the position in the uterus. A lot of work has been done to try and isolate the exact genetic and environmental issues as it is such a common problem, so efforts need to be directed at preventing it if that is possible in the future.

When a child is born with a clubfoot the first thing that needs to be addressed is parental concern which is understandable. The parents need to have a discussion with the experts to get a clear understanding of exactly what the problem is and its nature and what the best options are for its management. If the clubfoot is flexible and not part of a more widespread genetic syndrome then treatment is started at birth. The most common protocol is what is known as the Ponseti approach. With this the foot is manually mobilized and stretched and the moved to the most corrected position that it can be and then the foot and leg are placed in a plaster cast to hold it there. This is repeated at regular intervals of about a week to keep improving the position of the foot. This will generally take around up to a few months on average with a lot of individual variability. After that, a brace may need to be worn for a period of time to help maintain the correction of the clubfoot. A few may need a surgical procedure if any particular structure in the foot is too tight and needs releasing. The rigid types of clubfoot and those resistant to this casting approach will most likely need a surgical correction.

Although you have sufficient medical marvels to thwart ailments, prevention remains a crucial inference. The foot doctor Columbus showcases...