Can you use the Vibram Five Fingers as running shoes? 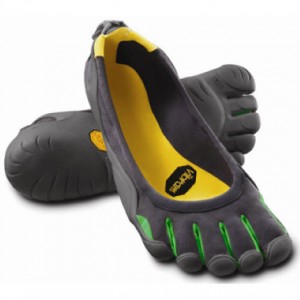 The Vibram Five Fingers footwear are a type of footwear that was released in 2004 and was designed to fit the foot like a glove with a pocket for each toe, like the gloves. They were initially relatively low key but became popular with the boating and yachting communities as the nature of the material and its design meant they were well suited to that environment. During 2009 when a barefoot running fad was growing, these shoes were widely adopted by those touting and trying barefoot running due to the very minimalist nature of the footwears design. It was thought that the design of the Vibram Five Fingers was so minimalist that running in them was the next best thing to running barefoot as there was nothing in the design that interfered with the natural motion of the foot, so the shoes were believed to mimic barefoot running. They became very popular.

The Vibram company embraced the barefoot running movement and heavily promoted their shoes and barefoot running as a viable alternative to running in the more traditional cushioned running shoe. They began making a number of marketing claims for their shoes such as a reconnection of your foot with the earth and allowing your foot to feel every change in terrain. They also claimed that the shoes gave a shorter stride length and a lighter step. Most unfortunately, they echoed the claims that those who were touting barefoot running and made the claims that if you took up running in their shoes you would get less injuries. This was at a time that health professionals were seeing a significant upsurge in injuries in runners due to barefoot runner. There was also no evidence at that time (and there still is not any now) that barefoot running or running in the Vibram Five Fingers led to reduced injuries. This resulted in a class action lawsuit again Vibram for those false claims which they chose to settle out-of-court rather than go to trial. Into later 2013 the barefoot running fad started to fall away and the sales of Vibram Five Fingers dropped off significantly from that time.

The Vibram Five Fingers are still available, most used by smaller hard core group who are immune to the jokes about how un-fashionable the shoes are and look. There are people still running in them. If anyone does want to run in them, then it is the type of thing that a lot of time is needed to slowly get used to using them. The foot muscles will need to be strengthened and as the shoes make you run with a slightly different technique, then time is going to be needed to adapt and transition to these types of shoes.

Having said that, runners have all but totally lost interest in these. You almost never see a runner in a pair of these at any running event or running race. The Vibram company is apparently planning for a major relaunch of the Vibram Five Fingers in the later part of 2021.

If you have created a new website and have allocated spaces within the website design for advertising, you will probably want to start...

When you go with a made use of auto, you can get it from an exclusive supplier or from a neighborhood dealership. While some buyers would...