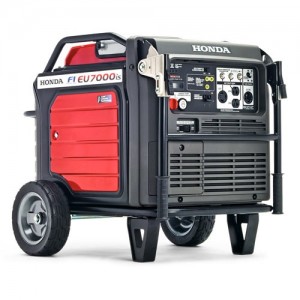 Due to the portable design and the 5500 watts of continuous power this generator provides, it makes a perfect suit for everybody who needs an RV generator. As it is very quiet, it also won’t bother anyone at the campsite while running. However, when coupled with another generator using a parallel kit, it does a magnificent job being a home backup power supply.

Although the generator itself is quite powerful and has a great capacity, it is surprisingly small in size. This model has portable qualities like traditional inverter generators. The square-shaped design is pretty convenient and compact. Even though it doesn’t appear to be heavy, the EU7000is weighs 261 pounds. Therefore, it is way heavier than some inverter models which can be easily carried in one hand. Still, the two fold-down handles and a wheel kit are also included in the package and moving the generator around with this equipment installed is much easier.

All the generators from the Honda EU series are well-known for being very quiet. The same thing goes for the EU7000is. This model has a rated noise level of 58 decibels while running on a 50% load which is a magnificent score. What’s more, on a 25% load, this generator barely reaches 52 decibels. The run time is not the most impressive feature of this generator but it is still pretty good and definitely worth mentioning. On a 50% load the EU7000is can run for about 6.5 hours straight. Keep in mind that it has a 5.1 gasoline tank. On a 25% load, this generator can last very long, probably up to 18 hours.

Most inverter generators in this class are only capable of producing about 4000 watts, sometimes even less. On the other hand, the EU7000is has a maximum capacity of 7000 watts and can provide continuous power of 5500 watts. Thus, you can connect more different appliances to this generator including some sensitive electrical devices. Even when being used to the full capacity, this Honda inverter generator produces a pure sine wave. Furthermore, this model features the Eco-Throttle Switch, also known as the Economy mode. It basically reduces the RPM when the demand for power is less than 25% and there are no appliances connected. Read more about features of Honda generators and comparisons, click here

This Honda generator is powered by gasoline which is way more affordable and accessible than propane. The gasoline powered generators are also way more powerful. Furthermore, the EU7000is has the fuel gauge and two light indicators that allow you to easily keep track of fuel levels. Once the oil level is way too low, the shut off sensors will automatically turn off the generator, preventing any overheating and increasing its lifespan.

All in all, if you are looking for a reliable, powerful, and long-lasting generator, the EU7000is is the perfect choice. It comes with a bunch of safety features and it is quite user-friendly. Although it may be a bit heavier than some of the competitors, with the equipment included in the package you shouldn’t have any problems moving it around.