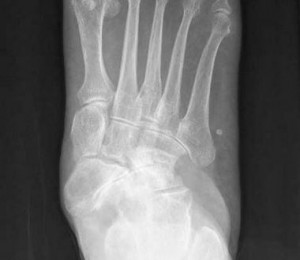 Mueller Weiss syndrome is a rare cause of pain in the midfoot in adults that was also known as Brailsford disease. It is a spontaneous onset osteonecrosis of the tarsal navicular in the foot. There is a more well-known condition of the navicular bone in children known as Köhler disease, which is also an osteonecrosis of the tarsal navicular bone, but they are different entities due to the nature of the growing bones in children. The condition was first reported by Schmidt in1925. It was W Muller who later proposed that the pathophysiology of the condition was due to an abnormal compressive force upon the midfoot area. Around the same time, K Weiss, reported that the appearances on x-ray were similar to those seen in condition called Kienbock disease, which is also an osteonecrosis. These two reports led to the most frequently used name for this condition, Mueller Weiss syndrome.

Mueller Weiss syndrome generally affects adults between 40 and 60 years of age (Köhler disease has a peak onset around 5 years of age). It appears to be more common in females. It can affect just one foot, or it can affect both feet. The classic symptoms are the gradual onset of pain in the midfoot and rearfoot that can often be localised to the most painful spot being over the navicular bone. A flat foot is also more common in those with this problem. The gold standard to diagnose Mueller Weiss syndrome is via the use of imaging. On x-ray there will appear to be a collapse of parts of the bone and sclerosis with comma-shaped deformity of the lateral aspect. A CT scan can also show the same abnormalities and can be used to assess the stage of the problem in more detail. A MRI can be more sensitive to help with the diagnosis as it is able to detect changes in the bone marrow.

Mueller Weiss syndrome is typically progressive and can produce severe pain and be quite disabling, so treatment does need to be started as early as possible to prevent it from being damaged too much. Initial treatment is to limit activities, perhaps some pain relief drugs and use supportive footwear. Often foot orthotics are used to help further stabilise the area and support the arch of the foot. This keeps a lot of pressure off the navicular bone. If that is not helping, then a further restriction in activity levels is needed so there is less pressure on the painful area. A moon boot or walking brace is the next step to further protect and immobilise the area if the symptoms are not improving. If all of these conservative approaches do not help, then there are surgical options that will help with the pain but do often leave some minor disability, which is more desirable than the chronic pain of an active disease. The surgery can be a decompression of the bone with drilling. Another option if there are areas of bone destruction are a surgical fusion of the joints around the navicular.