What are the determinants of gait? 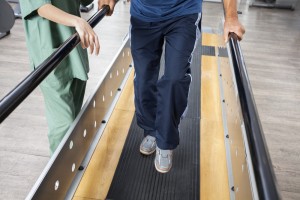 A typical walking gait pattern relies upon several important biomechanical characteristics which are known as the determinants of gait. The six determinants of gait were initially published by Saunders back in 1953, and still have been broadly accepted with some changes as well as minor issues. These determinants of gait are thought significant as they help maintain a more economical gait via the reducing the up and down center of mass movement that leads to a decrease in the metabolic energy necessary for motion. The principle underpinning this is that a improved management of these determinants of gait contributes to a rise in energy preservation and more efficient movement. The theory which does underpin these types of determinants of gait are typically in disagreement with the ‘inverted pendulum’ concept that considers the static stance leg acts as a pendulum that tracks an arc. The biomechanics area will continue to debate the merit of the two theories.

The 6 determinants of gait and just how they have an effect on the centre of mass (abbreviated as COM) movement and energy efficiency are:

These 6 determinants of gait happen to be pragmatically intriguing as they allow us to give attention to a number of important aspects to help keep the COM movement flat and help the efficiency of gait. Nevertheless, some current analysis queries if all or some of the determinants are actually that critical in the general system of the events which occur throughout the walking cycle. Despite that thinking of these kinds of determinants is key in comprehending gait disability.

Mediatrenz review last year stated that web is the most dominant intervention of modern age and is re defining the social and economic...

From the color found in logos and company branding down to those found in office walls and cubicles, picking colors isn’t only based on...

No matter how far you’ve gone in your quest for a new car, if you can’t afford to sign the dotted line just yet, then you are obviously in...