Biomechanical Problems of the Forefoot 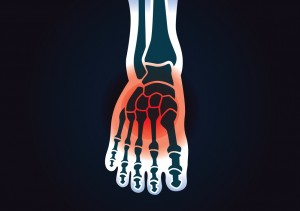 The foot is a complex biomechanical structure that has to do a lot of work. As it is such complex structure, there is a lot that can go wrong with it. There are many biomechanical deviations in the foot that can affect that normal biomechanics and cause symptoms. Podiatrists often use foot orthotics, footwear modifications and exercises to manage these types of problems.

There are various deformities of the forefoot that will need to be accommodated in foot orthoses. This is based on the model of the foot that for the foot to be normal that a plantar plane imaged under the ball of the foot must be perpendicular to a bisection of the back of the calcaneus. There are many deviations that the forefoot might have relative to what is the assumed normal. The medial side of the forefoot could be lower leading to what gets called a forefoot valgus. A forefoot valgus could be the whole forefoot is everted or it could just be the medial side of the forefoot being plantarflexed. This type of foot can have significant effects on how the foot functions. Exactly what those effects are will depend on how flexible the midfoot will be. If the midfoot is rigid, this forefoot valgus will cause the foot to roll outwards at the ankle joint resulting in a high arched foot. If the midfoot is flexible, then this foot type will just cause the midfoot to twist and flatten the arch.

The opposite type of foot type is what is called a forefoot varus in which the forefoot is in an inverted position relative to that bisection on the heel. This makes for a very flatfoot with almost no arch at all. There are two types of feet that have this appearance. One of these is what is called a true forefoot varus and is bony in origin. There is nothing other than foot orthotics that can be used to correct the alignment of the foot. There are no exercises or anything else than can be done for this foot type. There is a lot of bad information on the internet about treating this type of flat foot. The type of inverted forefoot that looks very flat is one that is due to a foot type known as forefoot supinatus. A forefoot supinatus is a soft tissue contracture that holds the foot in this position. As forefoot supinatus is a soft tissue problem, exercises and making the foot mobile will help it and foot orthotics generally do not work too well in this foot type. Those who tend to offer up all the bad information on the internet have no idea of the difference between forefoot varus and forefoot supinatus. Both are related to overpronation of the foot, and both can look very similar but they both have very different causes, so if they need to be treated, then they will have very different treatments.

If you think you have any of these sorts of biomechanical problems, then it might be a good idea to see a podiatrist.

Are you battling Emotional eating? Do you wish to find the Tapping for weight loss solution, yet still maintain your health? If the answer...

Two main bean shaped organs that take the responsibility of flushing the toxins out of our body, and which help maintain a proper vitamin...