The History of the Flip Flops Footwear 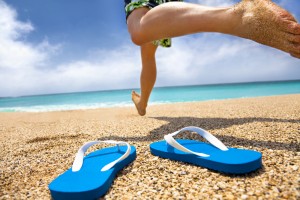 Flip flops are a type of sandal that consists of a flat sole which is held loosely on the foot by a Y-shaped strap which passes between the first and second toes and then around both sides of the foot. It is generally used as a casual footwear. The earliest versions of this style of footwear originated as early as the ancient Egyptians in 4000 BC. The name flip flop has been used since at least the 1960’s to describe this type of footwear and came from the sound made by the sandals when walking in them. They have a variety of names in different countries such as thongs or sometimes pluggers in Australia, jandals in New Zealand, slops in Africa and tsinelas in the Philippines.

The ancient Egyptian version of them were made from papyrus and palm leaves. In Africa, the Maasai constructed them from rawhide. In India and surrounding countries, they were made from wood. Rice straw was used in China and Japan. In early Greece, the toe strap was worn between the first and second toes, while Roman versions had the strap between the second and third toes. In Mesopotamia the strap was between the third and fourth toes. The modern version of the flip flop became popular in the United States after soldiers returning from World War II brought the Japanese z?ri with them and it caught on in the 1950s. By the late 1950’s the bright colours began to dominate the designs. The popularity was mostly due to their convenience and comfort especially in beach themed shops as summer shoes and became associated with the beach lifestyle in California.

The exact market size for the flip flops is difficult to ascertain due to the variety of manufacturers that are involved. It was claimed that in 2009 that the size of the market was in the region of $20 billion making it a bigger market than the size of the sneakers market. The largest segment of that market are the mass produced simple versions that are generally manufactured in China and can retail for a few dollars a pair. At the other end of the spectrum are the designer brands that can be quite expensive at the retail level.

Amongst health professional there is some discussion as to how good they are for the foot. While the sole of the flip flop can protect the foot from the ground, the lack of cover of the top of the foot does expose the foot to trauma. This is particularly important in industrial settings where they may be banned. The sole is flat, so the flip flops is not very supportive for those who may need more support. The solution here is to use the arch supporting flip flops, such as the Archies brand that have an arch support built into them. These Archies were designed by a physiotherapist and are very popular in Australia. The strap on flip flops also means the toes have to claw to help hold them on the foot, which also can be a problem for some people.

Feet with comfortable flip flops can add a hint of slack

Nothing is more satisfying than walking on the beach with comfortable flip flops as a true companion of feet. Beach is considered as one of...

In accordance with a write-up with Philly.com, Glaberson purchased a pair of bronze Walkstar FitFlops sandals for $60 at Nordstrom’s in the...

As soon as the calendar reaches April, a frenzied excitement runs through the population of the whole country. Kids are seen hopping with...